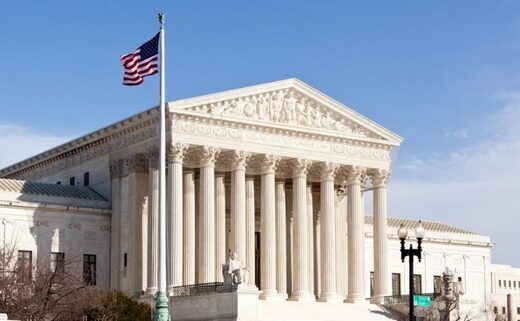 The U.S. Supreme Court on Monday rejected the Trump campaign’s challenge to last-minute changes in Pennsylvania, suggesting the election being over renders the issue “moot” and disregarding the ramifications of such rule changes for future elections.

At issue was the Pennsylvania Supreme Court’s decision to allow election officials to count mail ballots that arrived up to three days after Election Day 2020. The U.S. Supreme Court voted 4-4 on whether to issue a stay of that ruling, falling short of the majority needed to block it.

Justices Clarence Thomas, Samuel Alito, and Neil Gorsuch were the only dissenters from the decision. Because only four votes are necessary to grant a writ of certiorari, either of former President Donald Trump’s other appointees to the nation’s highest court, Brett Kavanaugh or Amy Coney Barrett, would have been enough to make the Court hear the case.

The Pennsylvania Supreme Court’s “decision to rewrite the rules seems to have affected too few ballots to change the outcome of any federal election. But that may not be the case in the future,” Thomas wrote. “These cases provide us with an ideal opportunity to address just what authority nonlegislative officials have to set election rules, and to do so well before the next election cycle. The refusal to do so is inexplicable。”

Last year’s dramatic expansion of mail voting “impedes postelection judicial review because litigation about mail-in ballots is substantially more complicated,” he explained. “For one thing, as election administrators have long agreed, the risk of fraud is ‘vastly more prevalent’ for mail-in ballots … The reason is simple: ‘[A]bsentee voting replaces the oversight that exists at polling places with something akin to an honor system.’ … Heather Gerken, now dean of Yale Law School, explained … that absentee voting allows for ‘simpler and more effective alternatives to commit fraud’ on a larger scale, such as stealing absentee ballots or stuffing a ballot box, which explains ‘why all the evidence of stolen elections involves absentee ballots and the like.’ The same article states that ‘[v]oting by mail is now common enough and problematic enough that election experts say there have been multiple elections in which no one can say with confidence which candidate was the deserved winner.'”

“One wonders what this Court waits for,” Thomas concluded. “We failed to settle this dispute before the election, and thus provide clear rules. Now we again fail to provide clear rules for future elections. The decision to leave election law hidden beneath a shroud of doubt is baffling. By doing nothing, we invite further confusion and erosion of voter confidence. Our fellow citizens deserve better and expect more of us.”

“Now, the election is over, and there is no reason for refusing to decide the important question that these cases pose,” Alito agreed in his own dissenting opinion. “Some respondents contend that the completion of the 2020 election rendered these cases moot and that they do not fall within the mootness exception for cases that present questions that are ‘capable of repetition’ but would otherwise evade review.”

“That argument fails,” he explained, because the issue in the case “is surely capable of repetition in future elections” and “it would be surprising if parties who are unhappy with the legislature’s rules do not invoke this decision and ask the state courts to substitute rules that they find more advantageous”; because “the suggestion that we are unlikely to see a recurrence of the exact circumstances we saw this fall misunderstands the applicable legal standard”; and because “it is highly speculative to forecast that the Pennsylvania Supreme Court will not find that conditions at the time of a future federal election [i.e., COVID-19 and its related restrictions] are materially similar to those last fall.”

Monday’s decision means that any hope of reforming state election rules to alleviate fraud concerns in time for the 2022 midterm elections or 2024 presidential election now rests entirely with whatever Republican-controlled state legislatures can be pushed to take action.