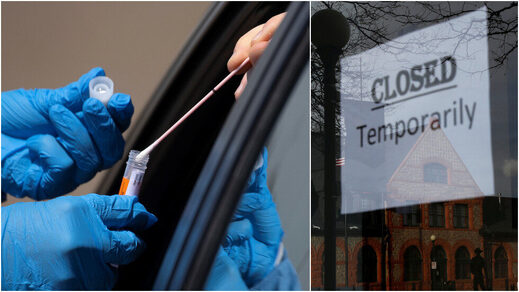 As several states move to reintroduce containment measures, the US has again topped its one-day record for new Covid-19 cases. Tallying more than 45,000 infections, the spike could undo a falling trend in fatalities.

Friday saw the US case count jump by 45,242, according to data collected by Reuters, putting the total number of infections in the country at nearly 2.5 million.

The spike in cases comes as a handful of states see their outbreaks accelerate, prompting local officials to scale back moves to lift lockdown measures imposed to contain the virus.

Texas Governor Greg Abbott has temporarily ordered bars in the state to shutter by midday and required restaurants to keep seating capacity at no more than 50 percent. Bars in Florida were made to stop serving alcohol entirely, while California Governor Gavin Newsom warned that a new stay-at-home order could be introduced in some harder-hit counties. All three states have seen a significant surge in cases in recent weeks.

Though his critics and political opponents have sounded alarms over the apparent resurgence of the virus, US President Donald Trump has maintained optimism amid the pandemic, telling attendees at a recent White House event that “We’re having some very good numbers coming out in terms of the comeback, the comeback of our nation, and I think it’s going very rapidly and it’s going to be very good.” The president has been eager to reopen for some time, as the US economy has taken a serious beating under the sweeping lockdown measures, seeing more than 47 million Americans thrown out of work.

Crowded mass protests sparked in hundreds of cities by the police killing of George Floyd last month have likely played a role in the recent jump in cases, with demonstrators largely defying social distancing guidelines. Media coverage of the rise in infections has focused almost exclusively on those gathering at clubs and beaches, however, virtually ignoring the massive marches as a potential factor.

Though some of the recent increases may be explained by ramped-up screenings for the virus, some health experts have cautioned that a boost in testing does not account for the full spike – which has applied to hospitalizations in addition to cases – arguing that outbreaks are, in fact, accelerating.

To date, the virus has killed over 125,000 people in the US. While a rolling seven-day average compiled by the Covid Tracking Project shows fatality figures are down at the moment, the recent spike could soon reverse that trend, as new cases take time to progress to the terminal stage. The global death toll now verges on 494,000, according to Johns Hopkins University, with nearly 9.8 million infections tallied worldwide.

Ghislane Maxwell Finally Arrested by FBI. Is She The Center of The Entire Epstein Case? — Society’s Child — Sott.net