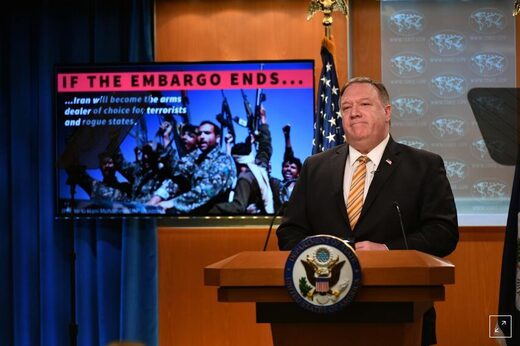 © Mangel Ngan/Pool via REUTERS
U.S. Secretary of State Mike Pompeo gives a news conference about dealings with China and Iran, and on the fight against the coronavirus disease (COVID-19) pandemic, in Washington, U.S., June 24, 2020.

Speaking at a news conference, Pompeo said the ships delivered about 1.5 million barrels of Iranian gasoline and related components, and warned mariners against doing business with the government of Venezuelan President Nicolas Maduro, whose ouster Washington seeks.

“As a result of today’s sanctions, these captains’ assets will be blocked. Their careers and prospects will suffer from this designation,” Pompeo said in a statement later.

“We will continue to support the National Assembly, interim President Guaido, and the Venezuelan people in their quest to restore democracy,” Pompeo added to reporters.

President Donald Trump’s administration is seeking to block Iran’s energy trade and also bring down Maduro. It has threatened reprisals and warned ports, shipping companies and insurers against assisting the tankers.

Venezuela’s exports are hovering near their lowest levels in more than 70 years and the OPEC member’s economy has collapsed. Yet Maduro has held on, frustrating the Trump administration.

In a statement on Twitter, Venezuelan Foreign Minister Jorge Arreaza called the sanctions “an excess of arrogance” and “more proof of the Trump hawks’ hatred of all Venezuelans.”

Iran has sent five tankers since April to the socialist government of fuel-starved Venezuela. The shipments have done little to alleviate hours-long lines at gas stations.

In an interview with news site Axios published on Sunday, Trump played down his January 2019 decision to recognize Guaido, speaker of the opposition-held National Assembly, as rightful leader. Trump has been disappointed by the inability of his policy to oust Maduro, U.S. officials have said privately.

The United States and most other Western countries have recognized Guaido as the OPEC nation’s interim president since January 2019, regarding Maduro’s 2018 re-election as a sham.

But Maduro has retained the support of the military as well as the backing of Russia, Cuba, China and Iran.

The White House said on Monday that Trump had not lost confidence in Guaido.

New anti-Biden ad hammers him as part of the swamp — Puppet Masters — Sott.net