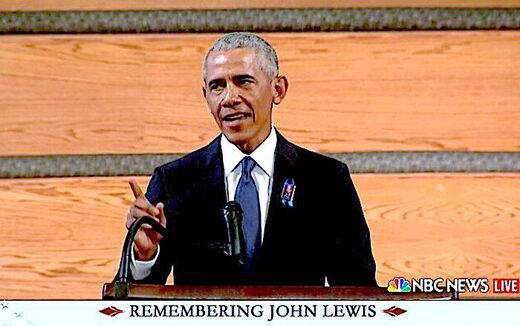 Obama’s Thursday speech included a call for an end to the Senate filibuster, calling it a “Jim Crow relic,” so Democrats can pass their agenda items should they win in November.

Before turning to the topic of the former president’s speech, Carlson began his Thursday night Tucker Carlson Tonight monologue by referring to the ongoing violence sparked by the death of George Floyd a “power grab” that is currently “being coordinated by the most ruthless and cynical figures in American politics.”

“They accuse you of the crimes they themselves are committing. It makes your head spin. Arguing with them is pointless. They’re nihilists. They don’t believe in the existence of truth, or in the fixed meaning of words. They care only about power.

“If you needed more evidence of that, Barack Obama showed up at Congressman John Lewis’ funeral today. Obama claimed he was there to eulogize his old friend. But that’s not true and that’s not what he did. Instead, Obama gave a divisive and deeply dishonest campaign speech in church.”

After playing a clip from Obama’s speech, Carlson said,

“It’s hard to believe that clip is real, but it is, down to the coined fake accent, Mr. Hawaii guy. Imagine if some greasy politician showed up at your loved one’s funeral and started throwing around stupid partisan talking points about senate procedure. Can you imagine that? You would be shocked if that happened. You’d probably walk out. Desecrating a funeral with campaign slogans? What kind of person would do that?”

“But Democrats in the audience didn’t seem offended. They didn’t blink. They cheered. It all seemed normal to them. And why wouldn’t it? Political power is their religion. It’s not out of place in a church. it’s what they worship.”

Carlson contended that Democrats seek to make the changes they seek “permanent, by packing the Supreme Court, packing the United States Senate, packing the electorate itself by importing tens of millions of new voters.”


Comment: No ‘stone’ unturned, the Dems are trying to dig a grave for Trump and the Republican party. Obama’s crass conduct, at a funeral no less, is a ‘Prime Time’ example.

There is no Iranian-American agreement or truce in Iraq — Puppet Masters — Sott.net