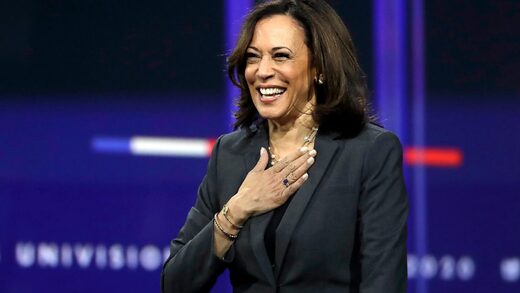 Presumptive Democratic nominee Joe Biden named Sen. Kamala Harris (D-Calif.) as his running mate on Tuesday, ending months of speculation over one of the most consequential decisions of his 2020 presidential bid.

Biden called Harris, a former rival in the Democratic primary, the best equipped to help him defeat President Trump and lead the nation through the coronavirus pandemic, economic downturn and racial divide.

Harris, who is of Jamaican and Indian descent, would be the first woman to be vice president if Biden is elected.

“These aren’t normal times. For the first time in our history, we’re facing three historic crises — all at the same time. We’re facing the worst pandemic in 100 years. The worst economic crisis since the Great Depression. The most powerful calls for racial justice in a generation. And we have a president who has both failed to lead on the virus — costing lives and decimating our economy — and fanned the flames of hate and division,” Biden said in an email to supporters announcing the VP pick.

“I need someone working alongside me who is smart, tough, and ready to lead. Kamala is that person,” he added.

Biden lauded Harris’s accomplishments, first as attorney general of California and later as a U.S. senator from the nation’s largest state. He called her “one of the toughest and most effective Senators on two of the most important committees” in the upper chamber — the Intelligence and Judiciary committees. Harris also sits on the Senate Homeland Security and Governmental Affairs Committee as well as the Budget Committee.

Biden praised Harris as a leader on criminal justice and marriage equality and said she has “focused like a laser” on racial disparities that have resulted from the pandemic.

“He had enormous respect for her and her work,” Biden said. “I thought a lot about that as I made this decision. There is no one’s opinion I valued more than Beau’s and I’m proud to have Kamala standing with me on this campaign.”

Harris said on Twitter that Biden “can unify the American people because he’s spent his life fighting for us. And as president, he’ll build an America that lives up to our ideals.”

Biden and Harris will address reporters for the first time as the Democratic ticket on Wednesday from Biden’s home town of Wilmington, Del.

They will officially accept the party’s nominations at the Democratic National Convention next week. Harris will speak Wednesday ahead of former President Obama. Biden will close out the event Thursday night.

“Joe Biden nailed this decision,” Obama said in a statement. “By choosing Senator Kamala Harris as America’s next vice president, he’s underscored his own judgment and character. Reality shows us that these attributes are not optional in a president. They’re requirements of the job. And now Joe has an ideal partner to help him tackle the very real challenges America faces right now and in the years ahead.”

Ultimately, Biden chose a rising Democratic star and former presidential primary opponent, whom he once clashed fiercely with on the campaign trail.

During the primary debates, Harris hammered Biden over his civil rights record, accusing him of being close friends with senators who supported segregation and of his past opposition to a federal busing system she used as a child that was meant to integrate schools.

Harris’s campaign sold T-shirts of her as a young girl going off to school to celebrate the debate moment that briefly saw her spike in the polls.

But she was not a factor down the stretch in the primary and she dropped out when her campaign ran out of money.

Biden has said that he does not hold a grudge.

“Her record of accomplishment — fighting tooth and nail for what’s right — is why I’m choosing her,” Biden said.

“There is no door Kamala won’t knock on, no stone she’ll leave unturned, if it means making life better — for the people. She will wake up every day — like I will — thinking about how to make life better for people. How to rebuild our country back better. How to make it more just. How to win the next fight in the battle for the soul of this nation.”

Trump and his campaign swiftly attacked the newly finalized Democratic ticket, which they dubbed “Slow Joe and Phony Kamala” in an ad sent out on Twitter.

The Trump campaign released a blistering statement on Harris that recalled her primary attacks on Biden and accused her of abandoning her own morals for political gain.

The Republicans signaled they would look to use Harris’s record as attorney general of California against her. She has been criticized by some on the left for policies they say resulted in racial minorities being locked up for low-level drug offenses.

“Not long ago, Kamala Harris called Joe Biden a racist and asked for an apology she never received,” Trump campaign spokeswoman Katrina Pierson said. “Clearly, Phony Kamala will abandon her own morals, as well as try to bury her record as a prosecutor, in order to appease the anti-police extremists controlling the Democrat Party.”