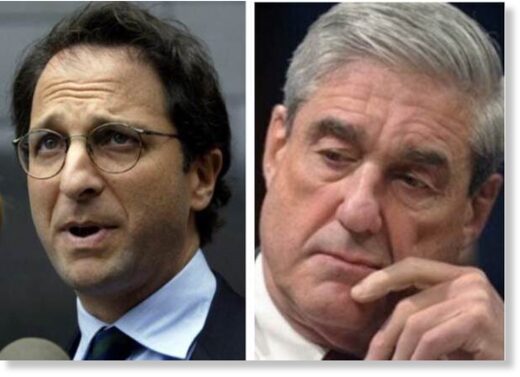 The New York Times released an op-ed yesterday by the most corrupt individual in US Deep State history, Andrew Weissmann:

Today, Wednesday, marks 90 days before the presidential election, a date in the calendar that is supposed to be of special note to the Justice Department. That’s because of two department guidelines, one a written policy that no action be influenced in any way by politics. Another, unwritten norm urges officials to defer publicly charging or taking any other overt investigative steps or disclosures that could affect a coming election.

Attorney General William Barr appears poised to trample on both. At least two developing investigations could be fodder for pre-election political machinations. The first is an apparently sprawling investigation by John Durham, the U.S. attorney in Connecticut, that began as an examination of the origins of the F.B.I. investigation into Russia’s interference in the 2016 election. The other, led by John Bash, the U.S. attorney for the Western District of Texas, is about the so-called unmasking of Trump associates by Obama administration officials. Mr. Barr personally unleashed both investigations and handpicked the attorneys to run them.

The Atlantic also released an op-ed by Weissman yesterday. Crooked Weissmann says much of the same:

What is the American public to make of Attorney General Bill Barr’s congressional testimony defending his actions in the Trump ally Roger Stone’s case? During Barr’s appearance before the House Judiciary Committee last week, Barr claimed the mantle of fairness and compassion, arguing that the career prosecutors were out of line in seeking a nine-year sentence for this first-time offender, who is a nonviolent criminal and 67 years old. Back in February, Barr had withdrawn the submission of career professionals for a seven-to-nine-year sentence and instead sought a sentence of at most three to four years. Two weeks later, a district judge sentenced Stone to 40 months of jail time, which Barr testified was a vindication in full.

Sound reasonable? Not in the slightest. As every experienced federal prosecutor would immediately understand, Barr’s position violates Department of Justice lawyers’ training, their obligations to the court, their duty under the U.S. sentencing guidelines, and the equal application of the law to all. I know — I was a federal prosecutor for two decades and a senior member of the special counsel’s office under Robert Mueller. Barr’s testimony amounted to an argument that the ends justified the means; it was fine to submit the revised sentencing recommendation so long as a court ultimately selected a sentence within that range.

What does this tell us?

1. Weissmann and the Deep State are extremely scared of what is coming out in the Durham investigation. Their crimes are finally under review. President Trump knows that the crimes are devastating and based on what we know, the Deep State doesn’t know what specific crimes they will be charged with. This alone is scaring them to death because the Deep State knows what they have done and it is bad.

2. The New York Times and the Atlantic are digging in again. They will not concede their errors in reporting totally dishonest messages from the Obama Deep State over the past four years especially. These two entities are at the bottom of the bucket as far as fake news goes.

What we do know –

We know Andrew Weissmann is a crook. He never should have been allowed inside the DOJ. We reported on five of his actions back in March 2019 that cost tens of thousands of jobs and untold suffering by those in Weissmann’s way:

Sydney Powell was with Mark Levin on his show on FOX News and she described the actions taken by former FBI Head Robert Mueller during the Enron case in the early 2000’s. Powell wrote LICENSED TO LIE: Exposing Corruption in the Department of Justice after seeing a core group of federal prosecutors break all the rules, make up crimes, hide evidence, and send innocent people to prison in the Enron case. When she saw them promoted to the top of the US legal system at the DOJ and FBI she had had enough.

Mueller and Weissmann made up a crime that resulted in the complete destruction of Arthur Andersen and the loss of more than 80,000 jobs for those employed by this corporation. This crime was eventually overturned by the US Supreme Court unanimously but it was far too late for all involved because the company was totally destroyed years before the Supreme Court decision.

Next, according to Powell, Mueller and Weissmann created crimes to indict four Americans at Merrill Lynch. They put these four individuals through ten years of “unmitigated hell”. Putting at least one of the four in solitary confinement.

3. General Mike Flynn and his lies that never occurred –

Move forward more than a decade and Mueller and Weissmann joined hands again but this time in the corrupt and unconstitutional Mueller Special Counsel team. Because of this, none of the crimes or corrupt actions taken against the President and those closest to him are legal or just.

This is of no concern to Mueller and Weissmann however. The first person they targeted was President Trump’s former National Security Advisor. Flynn was set up by former FBI Agent Peter Strzok and another corrupt agent in the White House. The notes they took as a result of their interview with the General were altered and the final notes (form 302’s) have not yet been uncovered. General Flynn was set up.

4. Paul Manafort’s crimes that the FBI earlier claimed were not crimes –

Paul Manafort was indicted on a number of crimes by corrupt Mueller and his gang. The problem with their initial indictment was that the actions under indictment were reviewed by the FBI previously and not considered crimes. The FBI interviewed Manafort in 2014 for the same crimes they indicted him on a few years later but neglected to press charges then because Obama gang members were involved.

Currently corrupt Obama appointed Judge Amy Berman Jackson has Manafort in solitary confinement for months now after putting a gag order on Manafort and then throwing him in jail. It’s a wonder what Manafort knows because Judge Jackson and the Mueller team want him dead.

5. Made up crime against numerous Russians and Russian companies –

Four out of five of the made up indictments in the Mueller investigation are Russians. As of mid-October 2018, the total number of individuals indicted was 37 individuals and three companies. We really don’t know and doubt that the Russians are even real. The individuals were indicted for posting stories on Facebook in Russian that Mueller says swayed the 2016 election towards Trump. The number of posts in Russian were less than a percent of a percent of posts recorded on Facebook during the period stated, part of which was after the 2016 election.

In the one case with Russians that has come to trial, with Russian Company Concord Management, is under indictment for a crime that the judge had to ask the Mueller team to define, because the so called crime is again made up.

In December 2019 in the Concord Management case it was uncovered that Mueller has a nude selfie on someone – we don’t know who, and his gang won’t tell how they got it, while running along with a special investigation created on a made up crime, where the individuals prosecuted aren’t even real.

This is only five incidences of the fake crimes and indictments by Weissmann and the Mueller team.

There are more (i.e. Roger Stone). It’s a shock that so many people believe that this thug Weissmann and his gang are legit. These people are crooks and hopefully their fears will soon materialize in indictments and prison sentences for all involved.

Get out of Syria — Puppet Masters — Sott.net