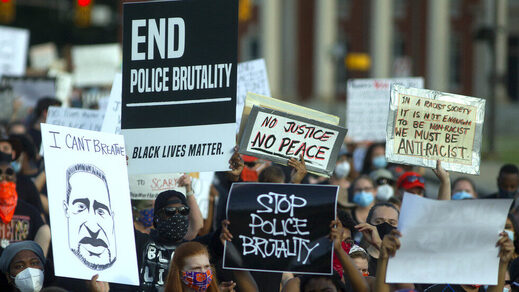 President Donald Trump’s executive order about police moves a lot of things in the right direction. It also won’t matter in the least, because police (mis)conduct is only a pretext for the current crisis, rather than its cause.

On Tuesday, Trump put forth improved federal guidelines that would drastically limit the use of chokeholds, give police more nonlethal weapons to cut down on shootings, fund more social workers, and condition federal aid on certifications in de-escalation and proper use of force policies.

Police reform may have been one of the demands of protesters who filled the streets of Minneapolis three weeks ago to denounce the death of George Floyd. Since then, the protests have turned into riots, first in Minneapolis and the neighboring St. Paul, then all over the US, including Washington, DC. This was even after the four officers involved in Floyd’s death were fired and charged – then had their charges upgraded by the state attorney general, guided by protester demands.

Meanwhile, those demands grew exponentially. Reforming the police was no longer enough, oh no – the Minneapolis PD had to go completely, and “defund the police” became a nationwide demand by Black Lives Matter and their Democratic Party fundraisers. But wait, there was more – names had to be changed, statues were smashed or defaced, people who expressed insufficient zeal for the rapidly changing Cause (let alone dared oppose it) had to be fired and newsrooms purged. There has been talk of racial reparations, and a group of “peaceful protesters” even picked up guns and declared an “autonomous zone” in downtown Seattle, Washington.

Throughout all that, Trump tweeted “law and order!” but local officials in affected cities – almost entirely Democrats – rejected his offer of National Guard to quell the riots, denounced him as a tyrant, then turned around and demanded federal money to fix the damage from the violence they allowed to run rampant. Police chiefs and mayors were filmed groveling before the “peaceful protesters” and getting driven away in humiliation.

It was only natural for the activists to ramp up their demands, in the face of these displays of weakness, which were further amplified by the mainstream media coverage. Meanwhile, Trump’s supporters grew increasingly disillusioned by the growing disconnect between his strongly worded tweets and the lack of any concrete action to put a stop to what seemed like mob rule. Tuesday’s executive order did little to change that.

“The optics of this EO while radicals still have control of a portion of Seattle and are still rioting are horrible,” tweeted former NYPD officer John Cardillo.

Democrats will give him nothing in return, Cardillo added, declaring that politically the order was “all downside, no upside.”

Filmmaker and one-time Trump booster Mike Cernovich – who has drastically soured on the president as of late – shared the sentiment, accusing Trump of pandering to people “who hate me and my supporters and will never vote for me.” As an example, he took aim at Trump’s campaign promoting the CNN interview of Van Jones, whom he described as a “far left radical who called Trump supporters racist.”

As if to prove Cernovich’s point, Jones actually posted a CNN op-ed later in the day outlining what Trump and Congress “must do” – including things Trump’s executive order has already done – and demanding much more.

Even a cursory glance at the #Resistance Twitter, meanwhile, revealed that the executive order did nothing whatsoever to appease the Trump haters. Quite the contrary, they denounced it as either pointless or hypocritical, while finding new reasons to declare the president racist – even if that meant cropping the African-American sheriff from the group standing around Trump as he signed the order, in order to claim it was a “very white” event.

In his remarks on Tuesday, Trump talked about “cooperation, not confrontation” and building on America’s founding and heritage to create justice for everyone. He also appealed to his administration’s economic record, arguing that the prosperity interrupted by the Covid-19 pandemic will make a roaring return.

That may have worked if the current protests were really about jobs, or police reform, or equal justice under US laws, or unity. But they aren’t, are they? Nobody really believes that. Their organizers say as much, with their ever-expanding demands. Their media enablers openly talk about how the protests resemble a “color revolution,” with the ultimate objective being the overthrow of Trump – whether at the ballot box in November or by other means.

Destruction of statues has moved from Confederates to the Founders already, and the very legitimacy of the US may be at stake. American politics have always been raucous, but this has gone beyond that, perilously close to French Revolution territory.

With that in mind, Trump’s police executive order seems like putting a band-aid on a fatal chest wound, and looks to be about as effective.

Nebojsa Malic is a Serbian-American journalist, blogger and translator, who wrote a regular column for Antiwar.com from 2000 to 2015, and is now senior writer at RT. Follow him on Twitter @NebojsaMalic

Chicago Mayor implores citizens to call 911 if they see DHS do something “that doesn’t seem right” — Society’s Child — Sott.net