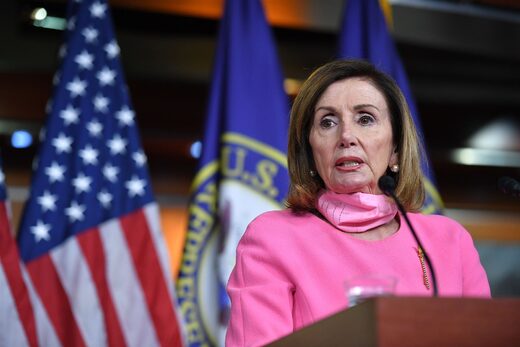 House Speaker Nancy Pelosi on Wednesday called for the removal of Confederate statues in the nation’s Capitol building after renewed calls to remove them from public spaces following the death of George Floyd.

The California Democrat wrote a letter to the Joint Committee on the Library, which oversees statues in the U.S. Capitol, calling for the removal of the artifacts because they lionize America’s slaveholding era.

“[T]he halls of Congress are the very heart of our democracy. The statues in the Capitol should embody our highest ideals as Americans, expressing who we are and who we aspire to be as a nation,” Pelosi said in the letter. “Monuments to men who advocated cruelty and barbarism to achieve such a plainly racist end are a grotesque affront to these ideals. Their statues pay homage to hate, not heritage. They must be removed.”

The statues are part of the National Statuary Hall Collection, which was created more than 150 years ago and is “comprised of statues donated by individual states to honor persons notable in their history,” according to its website. Robert E. Lee, general of the Confederate army during the Civil War, is located there as well as at least 10 others honoring the Confederacy.

However, President Donald Trump has resisted those called. On Wednesday he said he would “not even consider” renaming Army bases that honor Confederate leaders who fought to protect slavery and uphold white supremacy.

Other efforts, however, have been successful. NASCAR announced on Wednesday it would ban Confederate flags from its events. And in cities across the country, protesters have vandalized the statues.

The Southern Poverty Law Center in Montgomery has estimated that roughly 138 Confederate symbols have been removed from public spaces since 2015.

Why does Brazil’s Bolsonaro refuse to lock down his country’s economy? — Puppet Masters — Sott.net