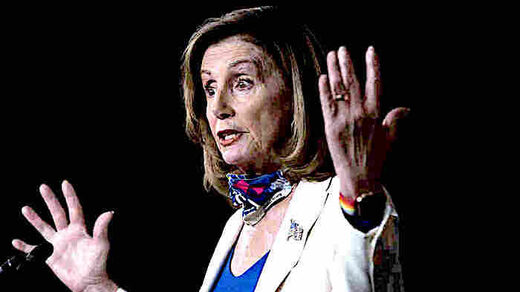 Democrats are scrambling following the massive surge of illegal immigrants and unaccompanied minors at the United States southern border. In the past week, there have been eye-opening reports about President Joe Biden’s migrant facilities, including children purportedly going days without showers or sunlight, populations at the detainment centers “akin to jail” at 729%, minors being denied access to communication to family members, and immigration lawyers being denied access to facilities.

The border crisis became so overwhelming that on Saturday, the Biden administration announced it was sending the Federal Emergency Management Agency to the border to assist with the record number of unaccompanied minors attempting to enter the U.S.

House Speaker Nancy Pelosi (D-Calif.) acknowledged on Sunday that there is a “humanitarian challenge” at the border, but blamed former President Donald Trump and climate change for the overflow of illegal immigration.

“The facts of these, there are more children, about 600, 700 more children, unaccompanied children coming over the border,” Pelosi said on ABC News’ This Week. “This is a humanitarian challenge to all of us.”

Pelosi then pivoted to blaming Trump for the surge in illegal immigrants.

“What the administration has inherited is a broken system at the border, and they are working to correct that in the children’s interest. “I’m so pleased that the president, as a temporary measure, has sent FEMA to the border in order to help facilitate the children going from one — the 72-hour issue into where they are cared for as they are transferred into family homes or homes that are safe for them to be.”

Pelosi again passed the blame to the Trump administration by saying,

“So this, again, is a transition for what was wrong before to what is right. Of course, we have to also look to Central America, Mexico and the rest. The corruption, the violence, all of that’s so bad.”

Pelosi then elaborated on what she considered a real culprit for the border crisis — climate change.

“My most recent trip to the Northern Triangle, that would be Honduras, Guatemala, El Salvador, you saw the impact of the climate change, mind you. These people were leaving because of the drought. They couldn’t farm and they were seeking other ways to survive.”

There are others who believe that Biden’s lax immigration policies are causing a crisis at the border. On Sunday morning, Sen. Bill Cassidy (R-La.), blamed Biden completely for the situation at the border. Cassidy told Fox News Sunday host Chris Wallace:

“Empirically it is [his fault] entirely. You can’t help but notice that the administration changes and there is a surge. When they think they can get in they begin sending their unaccompanied child on a train ride across Mexico where she may be kidnapped and trafficked, on the hope that they’re going to be waved through at the border.”

“You just can’t say, ‘Yeah, yeah, let everybody in’ — because then we’re affected down there at the border. The bad guys know how to market this.”

Last week, Texas Gov. Greg Abbott (R) proclaimed that he was deploying the National Guard to the U.S.-Mexico border to address the border crisis:

“The crisis at our southern border continues to escalate because of Biden Administration policies that refuse to secure the border and invite illegal immigration.”

Last March on the campaign trail, Biden announced to the world that he would end deportations if he was elected:

“In the first 100 days of my administration — no one — no one will be deported at all. From that point on, the only deportations that will take place are commissions of felonies in the United States of America.”

In January, a migrant rights group issued a statement on behalf of the people participating in a caravan to the United States that demanded the Biden administration “honor its commitments.” The statement from Pueblo Sin Fronteras read:

“We recognize the importance of the incoming Government of the United States having shown a strong commitment to migrants and asylum seekers, which presents an opportunity for the governments of Mexico and Central America to develop policies and a migration management that respect and promote the human rights of the population in mobility. We will advocate that the Biden government honors its commitments.”

A Biden Presidency will mean a faster US collapse and capitulation to globalist designs — Puppet Masters — Sott.net