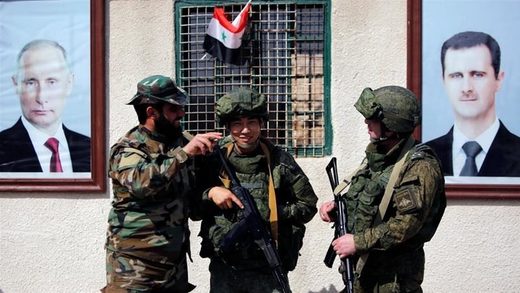 © Reuters
At least 100 Russian soldiers have been killed in Syria since September 2015.

Like with the disastrous Iraq quagmire years before the US war machine came to Syria under Obama, Washington’s rationale and justification for occupying the Syrian Arab Republic has shifted and changed drastically multiple times over.

When ultimately what started as US covert regime change efforts targeting Assad failed (based ostensibly in “protecting civilians”), the official mission then conveniently switched to ‘defeating terrorism’ — though of course this meant turning on the very jihadists the US armed and trained in the first place. Then the Kurds became the proxy flavor of the month, which also happened to have control of all the major oil and gas fields in the country’s east (“secure the oil!” – Trump has repeatedly echoed of late).

When the Islamic State collapsed and became just another underground insurgency like its al Qaeda cousin, the ever-hawkish national security state establishment argued that Trump must not pull troops out because of ‘Iranian expansion’.

But now that the myth that somehow Assad and the Syrians just want to hand their sovereign country over to their allies the Iranians has also largely fallen away (remember that Baathist Syria is a secular Arab and multi-confessional state, while Iran is a hardline Shia Islamic theocracy), a new official – and it might be added, provocative – US administration rationale has been concocted.

Washington now says it’s all about defeating the Russians. While it’s not the first time this has been thrown around in policy circles (recall that a year after Russia’s 2015 entry into Syria at Assad’s invitation, former CIA Deputy Director Mike Morell admitted in a TV interview he views that the US should be in the business of “killing Russians and Iranians covertly”).

And now the top US special envoy to region, James Jeffrey, has this to say on US troops in Syria:

“My job is to make it a quagmire for the Russians.”

Ironically, Jeffrey’s official title has been Special Envoy for the Global Coalition to Defeat ISIL, but apparently the mission is now to essentially “give the Russians hell”. 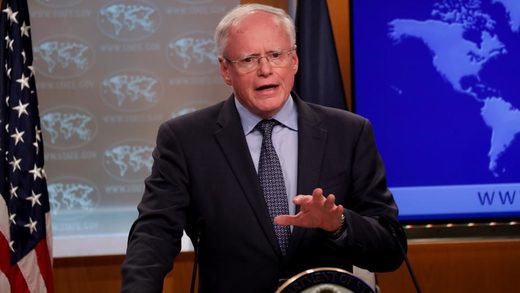 His comments were made Tuesday during a video conference hosted by the neocon Hudson Institute:

Asked why the American public should tolerate US involvement in Syria, Special Envoy James Jeffrey points out the small US footprint in the fight against ISIS. “This isn’t Afghanistan. This isn’t Vietnam. This isn’t a quagmire. My job is to make it a quagmire for the Russians.”

He also emphasized that the Syrian state would continue to be squeezed into submission as part of long-term US efforts (going back to at least 2011) to legitimize a Syria government in exile of sorts. This after the Trump administration recently piled new sanctions on Damascus.

As University of Oklahoma professor and expert on the region Joshua Landis summarized of Jeffrey’s remarks: “He pledged that the United States will continue to deny Syria – international funding, reconstruction, oil, banking, agriculture & recognition of government.”

But no doubt both Putin and Assad have understood Washington’s real proxy war interests all along, which is why last year Russia delivered it’s lethal S-300 into the hands of Assad (and amid constant Israeli attacks).

As for oil, currently Damascus is well supplied by the Iranians, eager to dump their stock in fuel-starved Syria amid the global glut. Trump has previously voiced that part of US troops “securing the oil fields” is to keep them out of the hands of Russia and Iran.

Recall the CIA’s 2016 admission of what’s really going on in terms of US action in Syria: