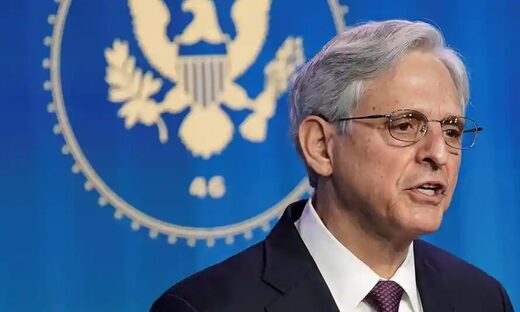 At his Senate hearing on Monday, attorney general nominee Merrick Garland will pledge to prosecute “white supremacists and others” who attacked the US Capitol on 6 January, in support of Donald Trump’s attempt to overturn his election defeat.

The pledge was contained in Garland’s opening testimony for the session before the Senate judiciary committee, released on Saturday night.

“If confirmed,” Garland said, ‘I will supervise the prosecution of white supremacists and others who stormed the Capitol on 6 January – a heinous attack that sought to disrupt a cornerstone of our democracy: the peaceful transfer of power to a newly elected government.”

Five people including a police officer died as a direct result of the attack on the Capitol, before which Trump told supporters to “fight like hell” against the result of the presidential election. Trump lost to Joe Biden by 306-232 in the electoral college and by more than 7m ballots in the popular vote.

More than 250 participants in the Capitol riot have been charged. As NPR reported, “the defendants are predominantly white and male, though there were exceptions.

“Federal prosecutors say a former member of the Latin Kings gang joined the mob, as did two Virginia police officers. A man in a ‘Camp Auschwitz’ sweatshirt took part, as did a Messianic Rabbi. Far-right militia members decked out in tactical gear rioted next to a county commissioner, a New York City sanitation worker, and a two-time Olympic gold medalist.”

In his testimony, Garland made reference to his role from 1995 to 1997 in supervising the prosecution of the perpetrators of the Oklahoma City Bombing, a white supremacist atrocity in which 168 people including 19 children were killed.

Trump was impeached for a second time on a charge of inciting an insurrection but was acquitted after only seven Republicans joined Democrats in the Senate in voting to convict, 10 short of the majority needed.

“It is a fitting time,” Garland said, “to reaffirm that the role of the attorney general is to serve the rule of law and to ensure equal justice under the law.”

The 68-year-old federal appeals judge was famously denied even a hearing in 2016 when Republican Senate leader Mitch McConnell blocked him as Barack Obama’s third pick for the supreme court.

Biden’s selection of Garland for attorney general is seen as a conciliatory move in a capital controlled by Democrats but only by slim margins, the Senate split 50-50 with Vice-President Kamala Harris the tie-breaking vote.

In his testimony, Garland said he would be independent from Biden, being sure to “strictly regulate communication with the White House” and working as “the lawyer … for the people of the United States”.

Trump pressured his first attorney general, Jeff Sessions, to do his bidding, then saw his second, William Barr, largely do so, running interference on the investigation of Russian election interference and ties between Trump and Moscow.

If confirmed, Garland will face sensitive decisions over matters including Trump, now exposed to criminal and civil investigation, and Hunter Biden, the new president’s son whose tax affairs are in question as he remains a target for much of the right.

Some on the left have expressed concern that Garland might be too politically moderate.

Black Lives Matter founder LaTosha Brown, for example, told the Guardian: “My concern is that he does not have a strong civil rights history … even when Obama nominated him, one of the critiques was that he was making a compromise with what he thought was a ‘clean’ candidate to get through.”

In his testimony, Garland said justice department civil rights work must be improved.

“Communities of colour and other minorities still face discrimination in housing, education, employment, and the criminal justice system,” he said, “and bear the brunt of the harm caused by pandemic, pollution, and climate change.”

Garland is expected to be confirmed.

Vote tabulation system responsible for ‘glitch’ in Antrim County, MI was in place in EVERY swing state — Puppet Masters — Sott.net