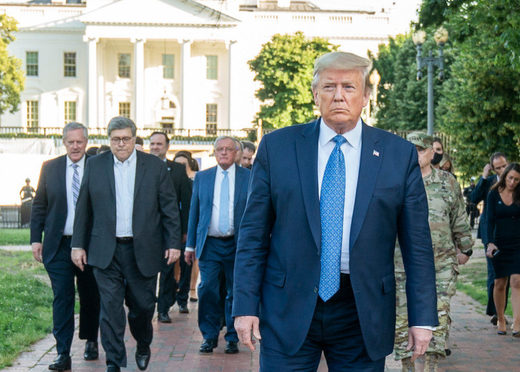 Following days of violent riots and looting in cities across the country, Washington, D.C., announced a 7 p.m. curfew on Monday night. About the same time, President Donald Trump addressed the nation from the Rose Garden. Afterward, he walked through Lafayette Park to St. John’s Episcopal Church, which rioters had set on fire the night before. Standing before the church sign, which reads “All are welcome,” President Trump, who previously said he’d be paying his respects to a very special place, held up a Bible.

The speech announcing the country would return to rule of law and protection of civil liberties, the walk through a park that the night before had been given over to rioters, and the visit to the vandalized historic church where every president has worshiped since James Madison, were reassuring to many in the country.

For the media, however, these actions were further proof that Orange Man Bad is literally the worst, restoring rule of law is criminal, and standing in front of a church holding a Bible is an assault on the American conscience. They focused on how the Park Police had cleared the area ahead of the city-wide curfew declared by D.C. Mayor Muriel Bowser.

Facts were no barrier to their narrative. They spun a tale of violent, jack-booted cops running rampant through the streets over innocent docile protesters, using tear gas to clear the area. It turns out none of that was true.

Every single major media outlet falsely reported that Park Police were unprovoked when they used “tear gas” to clear the area. If any of that were true, it might mark the first time in history that cops without gas masks launched tear gas in an area that the president of the United States easily walked through minutes later.

After thousands of false tweets, print stories, and broadcast stories to the contrary, local journalist Neal Augenstein of WTOP reported that a Park Police source said “tear gas was never used — instead smoke canisters were deployed, which don’t have an uncomfortable irritant in them.” Further, the source said the crowd was dispersed because of projectiles being thrown by the “peaceful protesters” at the Park Police and because “peaceful protesters” had climbed on top of a structure in Lafayette Park that had been burned the prior night.

On Monday, June 1, the USPP worked with the United States Secret Service to have temporary fencing installed inside Lafayette Park. At approximately 6:33 pm, violent protestors on H Street NW began throwing projectiles including bricks, frozen water bottles and caustic liquids. The protestors also climbed onto a historic building at the north end of Lafayette Park that was destroyed by arson days prior. Intelligence had revealed calls for violence against the police, and officers found caches of glass bottles, baseball bats and metal poles hidden along the street.

To curtail the violence that was underway, the USPP, following established policy, issued three warnings over a loudspeaker to alert demonstrators on H Street to evacuate the area. Horse mounted patrol, Civil Disturbance Units and additional personnel were used to clear the area. As many of the protestors became more combative, continued to throw projectiles, and attempted to grab officers’ weapons, officers then employed the use of smoke canisters and pepper balls. No tear gas was used by USPP officers or other assisting law enforcement partners to close the area at Lafayette Park. Subsequently, the fence was installed.

Prior to getting the actual facts, nearly every major media outlet falsely reported that canisters of tear gas, not smoke canisters, were used against peaceful protesters. The false story spread internationally despite its lack of evidence. Here are just a few of the uncountable examples.

Reuters published a video it claimed showed U.S. Park Police using tear gas. The video did not show any such thing.

PBS’s Yamiche Alcindor reported erroneously that she was “still processing that I saw peaceful protesters teargassed outside the White House so Pres Trump could walk to St. John’s Episcopal Church.”

The Washington Post ran an article falsely headlined, “Inside the push to tear-gas protesters ahead of a Trump photo op,” authored by Ashley Parker, Josh Dawsey, and Rebecca Tan. Washington Post reporter Hannah Natanson claimed Tan “was tear-gassed in reporting this story.” Gender and family issues reporter Samantha Schmidt retweeted that claim, adding, “There were five of us Post reporters — all young women — near Lafayette Square when federal officers started spraying gas and rubber bullets.”

“His walk came after riot police and National Guard troops used tear gas and flash grenades to clear a path through a peaceful protest in a city park,” the New York Times falsely reported about both the use of tear gas and whether the protests were peaceful. They were not.

In response to Augenstein, Garrett Haake claimed, “Tear gas was definitely used, and park police can’t 🤷🏼‍♂️that.” Asked what made him sure about his claim, he cited his “experience. the burning sensation it caused in my lungs, & my retired marine security.”

Here is a video of the effects of actual tear gas used in training.

Peter Baker of the New York Times falsely reported on the security threats and how they were removed, saying, “police and troops have moved against peaceful protesters with tear gas and flash bangs.”

Here the New York Times falsely claimed the protesters were peaceful and that tear gas was used against them: 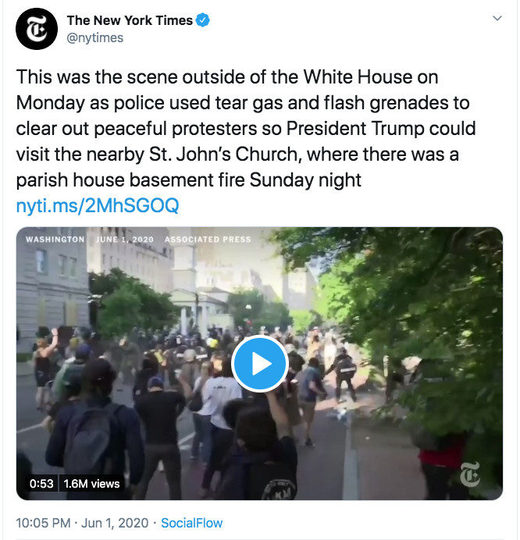 Brett LoGiurato, the senior editor of Wharton Press peddled the tear gas lie and instructed his political allies to censor the news: 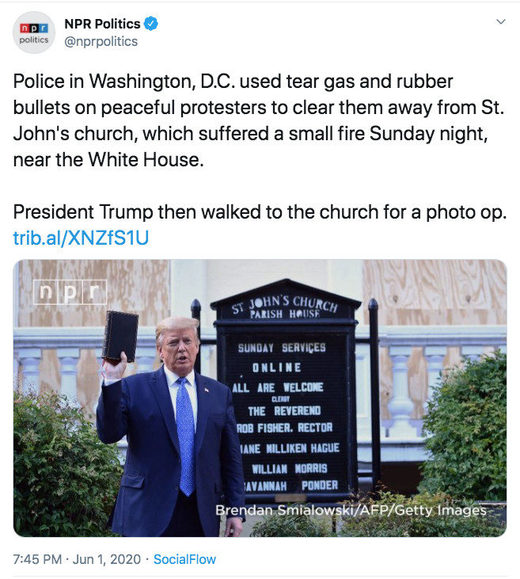 The Daily Beast/CNN’s Jackie Kucinich also falsely reported about peaceful protests and tear gas. She wrote, “This was a peaceful protest. And they are using tear gas. In the United States. In front of the White House. They tear gassed peacefully protesting and shot rubber bullets at people so President Trump could walk across the park to St. Johns on television. Correction …he had protesters tear gassed to walk to St. Johns, hold up a Bible in front of the church, usher in advisors for the photo-op. And then … walk home.” Whatever the previous sentences of fact-free emoting are, they’re not journalism.

Jonathan Swan of Axios claimed an anonymous “senior White House official told Axios that when they saw the tear gas clearing the crowd for Trump to walk to the church with his entourage: ‘I’ve never been more ashamed. I’m really honestly disgusted. I’m sick to my stomach. And they’re all celebrating it. They’re very very proud of themselves.'” To state the obvious: this source seems extremely poorly informed and not worth granting anonymity to.

Former Sen. Claire McCaskill of Missouri and Fox News contributor Jonah Goldberg both fell for and used the false reporting as a means of critiquing former Gov. Scott Walker of Wisconsin for complimenting Trump’s visit to St. John’s. Former Obama ambassador Michael McFaul, who has repeatedly spread false stories related to the Russia collusion hoax, also fell for this story.

The entire narrative the media glommed onto in lockstep was that Trump was a monster who tear-gassed peaceful protesters to do something meaningless. None of that was true. But it took a day of reporting to get the truth out, long after the lie took hold.

At times it seems as if there is nothing that many in the media won’t lie about to accomplish their political goals.

In related news, despite or perhaps because of the media hysteria, polls show overwhelming majorities of Americans support the use of the National Guard and the military to bring peace to the cities the media claim aren’t being targeted by violent riots.

Mollie Ziegler Hemingway is a senior editor at The Federalist. She is Senior Journalism Fellow at Hillsdale College and a Fox News contributor. She is the co-author of Justice on Trial: The Kavanaugh Confirmation and the Future of the Supreme Court. Follow her on Twitter at @mzhemingway