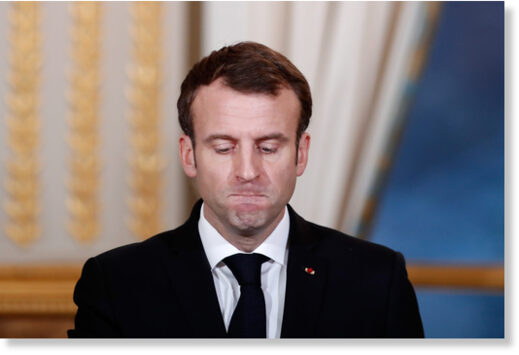 For the past three years, a profound protest has been heard throughout France. It has taken on hitherto unknown forms. Claiming to be a republican ideal, it is questioning the way in which political personnel serve the institutions. Faced with it, the President of the Republic monkeys a dialogue that he manipulates at every stage. For Thierry Meyssan, the country’s worst enemies are not those who want to divide it into communities, but those who have been elected and have forgotten the meaning of their mandate.

In October 2018, in France, a deaf woman protested from small towns and the countryside. The country’s leaders and the media were stunned to discover the existence of a social class they did not know and had never met before: a petty bourgeoisie, which had been excluded from the big cities and relegated to the “French desert”, an area where public services are rationed and public transport is non-existent.

This protest, which in some places turned into an uprising, was triggered by the increase of a tax on oil aimed at reducing fuel consumption in order to achieve the objectives of the Paris Climate Agreement. These citizens were much more affected than others by this increase because they lived far away from everything and had no transportation options other than their personal means.

Since the dissolution of the Soviet Union, the world economy has reorganized. Hundreds of millions of jobs have been relocated from the West to China. Most of those who have lost their jobs have had to accept lower paid jobs. They have been forced to leave the big cities, which have become too expensive for them, and move to the outskirts [1].

The Yellow Vests reminded the rest of society that they existed and could not help fight the “end of the world” if they were not first helped to fight for their “ends of the month”. They denounced the recklessness of political leaders who, from their offices in the capital, could not see their distress [2]. 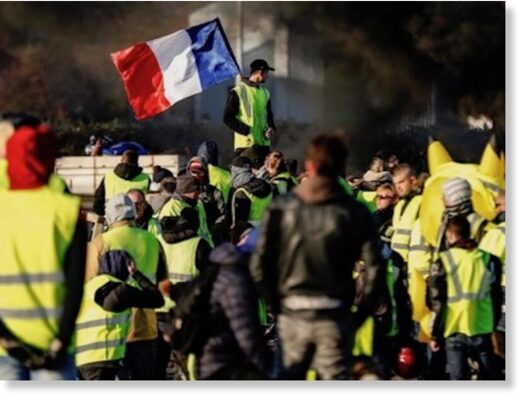 The Yellow Vests have always displayed the French flag in their events; a symbol absent from events organized by environmentalists.

The first political debates between politicians and some of their leading figures were even more astounding: the politicians proposed sectorial measures to make the price of petrol affordable when they calmly responded to them about the disasters caused by financial globalisation. The former seemed bewildered and out-dated, while the latter were the only ones with an overview. Competence had shifted from the political staff to their constituents.

Fortunately for the ruling class, the media dismissed these troublemakers and substituted them with other demonstrators, forcefully expressing their anger without the same intelligence. The hardening of the conflict, supported by the majority of the population, raised fears of a possible revolution. Panicked, President Emmanuel Macron took refuge for ten days in his bunker under the Elysée Palace, cancelling all his appointments. He thought of resigning and summoned the president of the Senate to act as interim president. The latter rebuffed him. Coming to his senses, he appeared on television to announce various social measures. However, none of these allowances concerned the Yellow Vests because the State did not yet know who they were.

All opinion studies tend to show that this protest is not a rejection of politics, but on the contrary a political will to restore the general interest, i.e. of the Republic (Res Publica).

Citizens are more or less satisfied with the Constitution, but not with the way it is being used. Their rejection is first of all that of the behaviour of the political staff as a whole, not of the Institutions.

So, to take matters into his own hands, President Emmanuel Macron decided to organize a “Great National Debate” in each commune, somewhat along the lines of the Estates General of 1789. Each citizen could express himself. The proposals would be summarized and taken into account.

From the very first days, the president sought to control popular expression. It was a question of not letting the mob say anything. Immigration”, “voluntary termination of pregnancy”, “death penalty” and “marriage for all” were to be kept out of the debate. Thus, while the president thought he was a “democrat”, he was suspicious of the People.

Of course, all groups can be dominated by passions. During the French Revolution, the sans-culottes were able to disrupt the debates of the assemblies by invectivating members from the galleries. But there is no reason to anticipate that the mayors would have been overwhelmed by their constituents.

The organization of the “Great National Debate” was the responsibility of the National Commission for Public Debate. The Commission wanted to guarantee the free expression of each citizen, while the President wanted to limit it to four themes: “ecological transition”, “taxation”, “democracy and citizenship”, and “organization of the State and public services”.

The Commission was therefore thanked and replaced by two ministers. Unemployment, social relations, old-age dependency, immigration and security were forgotten.

The president then took the stage. He took part in several televised meetings during which he answered all the questions asked, imbued with his own competence. The plan had evolved from listening to citizens’ concerns to answering them that they were well governed.

Three months, 10,000 meetings and 2,000,000 contributions later, a report was delivered and filed in a cupboard. Contrary to what this synthesis claims, the interventions of the participants in the “Great National Debate” dealt with the advantages of elected representatives, taxation and purchasing power, speed limits on roads, the abandonment of rural territories and immigration. Not only did this exercise in style not move things forward, but it gave the Yellow Vests proof that the president wants to talk to them, but not hear them. 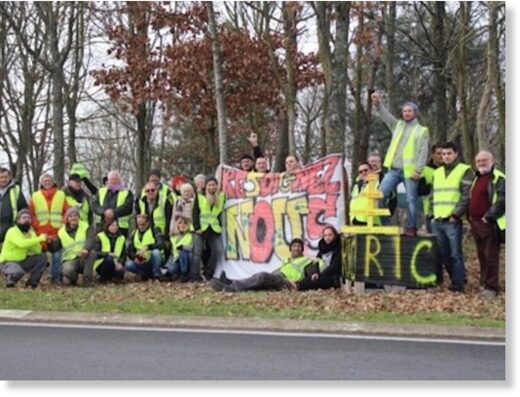 All over France, the Yellow Vests organized petitions for the creation of a Citizens’ Initiative Referendum (RIC).

Not during the “Great National Debate”, but during the demonstrations, many yellow jackets made reference to Étienne Chouard [3]. For about ten years, this man has been criss-crossing France assuring his interlocutors that a Constitution is only legitimate if it is drafted by the citizens. He therefore advocates forming a constituent assembly by drawing lots and submitting its result to a referendum.

President Emmanuel Macron responded by creating an assembly drawn by lot, a “Citizens’ Convention”. In the continuity of the “Great National Debate”, from the first day, he perverted the idea he was implementing. It was not a question of drafting a new Constitution, but of pursuing one of the four themes he had already imposed.

However, he did not see the drawing of lots as a means of overriding the privileges enjoyed by certain social classes or circumventing those of political parties. He approached it as a means of gaining a better understanding of the popular will, in the manner of polling institutes. He therefore had the population divided into socio-professional categories as well as by region. Then the members were drawn by lot from these different groups as for a panel of respondents. The definition of these groups was not made public. Moreover, it entrusted the organization of the debates to a firm specializing in panel facilitation so that the result was that of a survey: this assembly did not make any original proposals, but merely prioritized the proposals presented to it.

Such a process is much more formal than a survey, but it is not democratic since its members have never been able to exercise any initiative. The most consensual proposals will be transmitted to Parliament or submitted to the People by referendum. However, the last referendum in France, fifteen years ago, is not fondly remembered: the People censured government policy which was nevertheless pursued by other means in defiance of the citizens.

The totally illusory nature of this citizens’ assembly appeared with a proposal that its members said they did not want to submit to a referendum because the People, whom they were supposed to represent, would surely reject it. In doing so, they admitted that they had adopted a proposal following the arguments presented to them, but knowing that the People would reason otherwise.

It’s not me, it’s the scientists.

When the Covid-19 epidemic broke out, President Emmanuel Macron was convinced of the seriousness of the danger by the British statistician Neil Ferguson [4]. He decided to protect the population by applying the generalized mandatory lockdown recommended by the former team of Donald Rumsfeld [5]. He protected himself from criticism by setting up a “Scientific Council”, which he entrusted to a legal personality he believed to be indisputable [6].

Only one authoritative voice rose up against this device: one of the world’s most eminent infectious diseases physicians, Professor Didier Raoult [7] At the end of the crisis, he testified before a parliamentary committee. According to him, Neil Ferguson is an impostor; the Scientific Council – from which he resigned – is manipulated by conflicts of interest with Gilead Science (Donald Rumsfeld’s former firm); in an emergency situation, the role of doctors is to treat, not to experiment; the results of doctors depend on their conception of their profession, which is why patients entrusted to hospitals in Paris were three times more likely to die than those entrusted to hospitals in Marseille.

Didier Raoult’s remarks were not analysed by the media, which devoted their work to the outraged reaction of the administrative and medical nomenklatura. Yet the question of the competence of the President of the Republic, his government and the medical elite had just been raised by an undisputed member of the medical elite.

The first round of municipal elections took place at the beginning of the health crisis on March 15, 2020. Peripheral towns and rural areas, the land of the Yellow Vests, had often achieved majorities to elect their mayors immediately. As usual, things were more complex in the big cities. A second round was held at the end of the crisis, on June 28. A new step was then taken.

Six out of ten voters, scalded by the “Great National Debate” and indifferent to the “Citizens’ Convention”, went on strike at the polls.

Opinion polls assure us that the environmentalist vote is mainly the work of civil servants. This is a constant in all pre-revolutionary processes: intelligent people, if they feel connected to Power, are blinded and do not understand what is happening before their eyes.

Since the Constitution does not provide for this fracture within the People, no quorum has been established so that this ballot is valid although undemocratic in all the big cities. None of the mayors, even though they were elected by only one fifth of their constituents or even less, requested the annulment of the ballot.

No regime can continue without the support of its people. If this ballot-box strike happens again when the President of the Republic is elected in May 2022, the system will collapse. None of the political leaders seem to care.