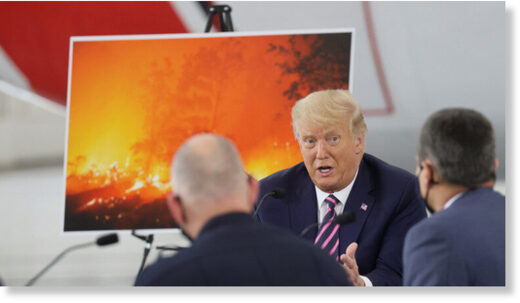 President Donald Trump sparred with a California official about the ‘science’ of the weather affecting wildfires that have raged across the state, but won praise from Governor Gavin Newsom for federal help in battling the blazes.

“It’ll start getting cooler. You just watch,” Trump said on Monday, during a roundtable in Sacramento with Newsom and other California officials, mostly Democrats.

“I wish science agreed with you,” responded Wade Crowfoot, the state secretary for natural resources, to which the president replied, “Well, I don’t think science knows, actually.”

Both Crowfoot and Newsom had acknowledged that the state could do better with vegetation management, but insisted that climate change was responsible for the severity of the wildfires, which have torched 2.8 million acres of land and killed 24 people in just the past 30 days.

“We feel very strongly the hots are getting hotter, the dries are getting dryer. Something has happened to the plumbing of the world and we come from a perspective, humbly, that we assert the science that climate change is real,” the governor told Trump at the meeting.

However, Newsom also welcomed Trump to California and thanked him for supporting the state financially as it battled the wildfires. He also said there was “no question… that we have not done justice on our forest management.”

It was unclear whether by “getting cooler” Trump was referring to the approaching change in seasons that would result in lower temperatures, or some kind of global cooling. He did not elaborate. He did, however, called Newsom a “good man” and say he had a good relationship with the California governor though they came “from different sides of the planet,” presumably politically.

The exchange in Sacramento came shortly after Democrat presidential nominee Joe Biden dubbed Trump a “climate denier” in a speech in Delaware, arguing that re-electing him would result in more of America being ablaze and underwater.

Earlier on Monday, Democrat mega-donor Tom Steyer told CNN that the “only solution” for California wildfires was electing Biden in November.

The fires have also affected Oregon to the north, and forced hundreds of thousands to evacuate. Smoke plumes have blotted out the sun and turned the skies orange for several days, affecting air quality.

India aiming to lure over 1,000 US firms out of China — Puppet Masters — Sott.net

The truth about COVID-19 pandemic and what needs to be done — Don’t Panic! Lighten Up! — Sott.net