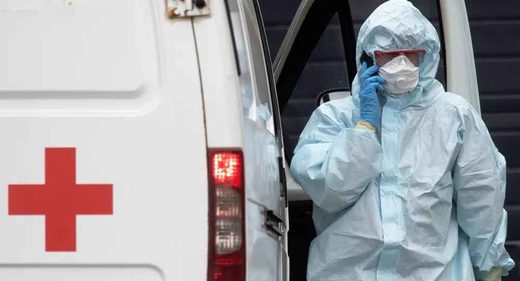 Having one of the lowest coronavirus-related mortality rates in the world, Russia still lags behind over a dozen countries with near-zero COVID fatality rates. That, however, was good enough to once again land Moscow firmly on the radar of Western mainstream media over its “suspiciously” successful bid to tackle the ongoing pandemic.

“In the past several days there have been news reports in Western media accusing Russia of under-reporting deaths in the country due to the coronavirus epidemic”, says Gilbert Doctorow, an independent political analyst based in Brussels. “In particular, I can point to articles in the New York Times and in the Financial Times. With respect to the New York Times, the piquant title given to one respective article pointing to a ‘Coronavirus Mystery’ – is fully in line with the daily dose of anti-Russian propaganda that this most widely read American newspaper has been carrying on for years now.”

Doctorow recollects that “a couple of weeks ago the same paper carried an article by one of its veteran science journalists accusing President Putin of using the coronavirus to undermine American science, and medicine in particular”.

Citing the allegations put forward by the Financial Times that Russian deaths from the virus could be 70% higher than the official number, Doctorow highlights that even if that were true, it does nothing to change the bigger picture.

“It obscures the fact that both official and unofficial numbers are miniscule compared to the devastation wrought by the virus elsewhere in Europe (Italy, Spain and the UK) or in the US, where the numbers continue to spike”, the political analyst says. “Russia has either a couple of thousand deaths or something closer to three thousand. Compare that to the official deaths ten times greater in the worst hit European countries having overall populations less than half or a third of Russia’s. So the accusation of 72% underreporting in Russia is a debating point that can easily be shown to be deceptive if not irrelevant.”

One of the most probable reasons behind the low COVID toll in Russia is the method of counting deaths, because “if the final cause is a disease of an organ, this is listed as the cause”, says Karl Grossman, an award-winning investigative reporter and a full professor of journalism at the State University of New York and College at Old Westbury.

According to Grossman, this is not unlike some, but not all, of the mortality accounting in the United States which resulted in subsequent changes in the number of people listed as dying from COVID-19.

“In doing so, there’s a sense in the West that a cover up is in play”, he presumes. “In my opinion, the cover up would be if the governments refused to acknowledge Person X had died. That’s not happening; rather, the cause of death is in dispute – Government A says Person X died from Y, while in other countries, the cause is listed as related to coronavirus.”

The apparent differences do not mean that Russia’s counting is imprecise, quite the contrary, argues Joe Quinn, a Paris-based political commentator and author, who believes that the COVID death toll is artificially inflated in the West.

The author recalls that the British and US health authorities have repeatedly stated in televised press conferences that their death rate “from COVID-19” includes both “suspected” cases and cases where the deceased has not been tested for the virus, which obviously results in ramping up the official COVID death statistics.

In contrast, it appears that Russia “has chosen to be more rigorous in their recording of the death rate from COVID-19” and “is only recording deaths as ‘COVID-19’ in cases where the deceased has tested positively for the virus and the death cannot be explained by other serious pre-existing health conditions”, Quinn explains.

The Western media would better serve their readers if they questioned the high death toll in Western nations rather than Russia’s low fatality rates, he opines.

Earlier China was also blamed for allegedly underreporting the actual number of deaths, points out Jonathan Power, a veteran foreign affairs columnist, film-maker and author. The author recalls that a month ago, Beijing revised the coronavirus death toll in mainland China from 3,342 to 4,632, which still paled in comparison to the huge number of deaths in the US and major European countries.

The Chinese government has no interest in blinding itself, and neither does Russia, he stresses. Both countries need to have an accurate picture of what’s going on “in order to know what to do and where to concentrate resources”.

According to Jonathan Power, besides the disparate methods of counting COVID deaths used in various parts of the world, “countries do their testing in different ways”.

“Russia tests a lot and therefore it has a more accurate idea of the number infections which might be lower than other countries that are guessing more and testing less”, he says. “It might well mean because of widespread testing Russia is more on top of the problem. Near universal testing was certainly part of the reason why South Korea got its number of deaths down to almost zero.”

Extensive testing in Russia compared with – at least until recently the UK – may contribute to the trend in which the number of infections looks high, but the death rate looks low, admits Mary Dejevsky, columnist on foreign affairs for The Independent. “Germany, where there was extensive testing, follows a similar pattern”, she remarks.

“Further reasons could be the comparative fitness of the Russian population”, she continues. “The UK obesity rate is high, and being overweight appears to contribute to the risk of dying of Covid-19; some 25 per cent of people who have died in the UK were obese.”

Naming other possible reasons, Dejevsky notes that the elderly population is also higher in the UK as a proportion of the population than in Russia, stressing that COVID frequently kills those over 65.

In addition, most of the areas of the UK that have been hardest hit by the pandemic are more densely populated than anywhere in Russia, the journalist remarks, adding that being less of an international hub than many West European countries and having larger distances between its cities may also help Russia to avoid high COVID fatalities.

“All or none of these factors may help to explain Russia’s surprisingly low mortality rate”, Dejevsky higlights. “But maybe the first precaution for analysts to take is not to start from the assumption that Russian figures are manipulated or censored.”

The coronavirus pandemic has been largely politicised and used for bashing Russia and China by the US’ deeply divided partisan groups, presumes Richard Vatz, a distinguished professor of Rhetoric and Communication at Towson University.

“The media in America have followed a predictable political weighing of agenda and evidence for years”, Vatz underscores. “When Mitt Romney was claiming that Russia was an underappreciated threat, Barack Obama and his political allies ridiculed him in presidential debates and generally for his allegedly anachronistic views… Fast forward to the Donald Trump presidency, and the Democrats berate and ridicule him for ignoring the allegedly imminent threat of Russia in foreign policy and deception and exaggerating the threat of China”.

There is a similar divide on the coronavirus, he believes, with the Dems mostly distrusting Russia and the Republicans going after China: “Trump appears to distrust both on this issue, especially the Chinese”, he notes.

“Of course, it’s typical when dealing with Russia that the assumption is that something is being hidden, probably with bad intentions, [for instance] to underplay the danger of the virus”, echoes Diana Johnstone, political writer specialising on European politics and Western foreign policy.

According to her, any “positive interpretation of the data” is not even considered. However, she agrees with Vatz that “this is a minor impoliteness compared to the torrents of invective against China”.

There’s no longer any question that Biden carried out a cover-up in Ukraine — Puppet Masters — Sott.net

Shooter at Pensacola base coordinated with al-Qaida — Society’s Child — Sott.net