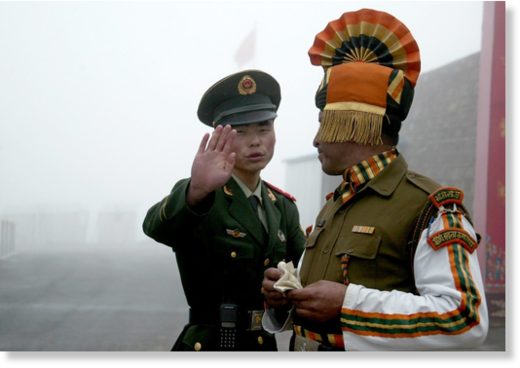 © AFP/Diptendu Dutta
A Chinese soldier (L) next to an Indian soldier at a border crossing in a file photo.

Both sides have sent reinforcements to disputed Ladakh line, as Beijing flexes its muscles around Asia

It would be counter-productive for BRICS and Shanghai Cooperation Organization members India and China to come to blows on account of some extremely remote – albeit strategically important – snowy mountain passes.

But when one looks at the 3,488-kilometer-long Line of Actual Control, which India defines as “unresolved,” that can never be totally ruled out.

As the Hindustan Times reported:

“India has pushed in high altitude warfare troops with support elements to the eastern Ladakh theater to counter [the] Chinese People’s Liberation Army’s aggressive posture designed to browbeat the government to stop building border infrastructure in the Daulat Beg Oldie sector as it may threaten the Lhasa-Kashgar highway in Aksai Chin.”

The highway runs from Tibet to southwestern Xinjiang Province, where the Karakoram Highway – the northern part of the China-Pakistan Economic Corridor – goes from Kashgar to Islamabad. Thence a road heads through Balochistan to Pakistan’s strategic Gwadar port, as part of China’s Belt and Road Initiative.

“The specialized Indian troops are familiar with the Tibetan Autonomous Region of China and are tuned for operating at rarefied altitudes,” Hindustan Times reports. “The scale of PLA deployment – two brigades’ strength and more – indicates that the move has the sanction of Beijing and [is] not limited to local military commanders.”

None other than Donald Trump has offered to mediate.

The current flare-up started building in late April, and led to a series of scuffles in early May, described as “aggressive behavior on both sides,” complete with fistfights and stone throwing. The Indian version is that Chinese troops crossed the Line of Actual Control (LAC), with vehicles and equipment, to block road construction by India.

The key area is around a spectacular 135 kilometer-long, 5-7 kilometer-wide lake, Pangong Tso. It’s in Ladakh, which is a de facto extension of the Tibetan plateau. One third is held by India and two thirds by China. 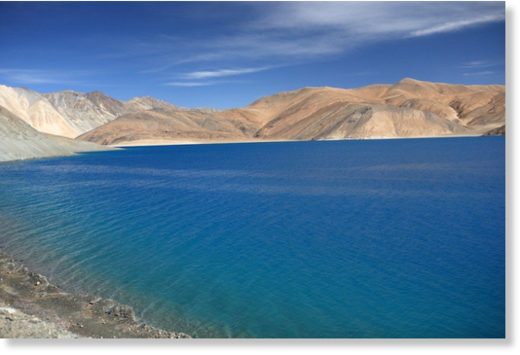 © AFP / Antoine Boureau / Biosphoto
Pangong Lake, on the border between India and China

Mountain folds around the lake are called “fingers.” The Indians say Chinese troops are close to Finger Two – and blocking their movements. India claims territorial rights up to Finger 8, but its de facto holding extends only to Finger 4.

New Delhi has been steadily expanding infrastructure development – and also troop deployments – in Ladakh for nearly a decade. Units now spend longer periods deployed along the LAC than the six months that used to be the standard rotation.

These are called loop battalions: They do a back and forth with the Siachen glacier – which was the theatre of a localized India-Pakistan mini-war in 1999 that I followed closely.

The Indians maintain there are no fewer than 23 “disputed and sensitive” areas along the LAC, with at least 300 “transgressions” by People’s Liberation Army troops every year.

The Indians are now particularly focused on the situation in the Galwan valley in Ladakh, which they maintain was breached to a distance of 3 to 4 km by PLA troops now in the process of digging defenses.

Diplomatically, it’s all pretty hazy. The Chinese Ministry of Foreign Affairs accused Indian troops of “crossing the line” in both Ladakh and Sikkim, as well as “attempting to unilaterally change the status of border control.”

The Indian Foreign Ministry has preferred to maintain that “established mechanisms” should prevail in the end, justifying its relative silence with the explanation that quiet diplomacy between military commanders and officials must take precedence.

That’s in stark contrast with what Indian sources on the ground are stressing: face-off between troops in at least three points in Ladakh and Sikkim; too many Chinese troops at LAC areas patrolled by India; and blocking of Indian patrols in finger areas on the Pangong Tso.

Interestingly, Indian defense sources deny there’s a Chinese troop buildup across the middle sector of the LAC, in Uttarakhand; they see what would qualify as routine “local movements.” 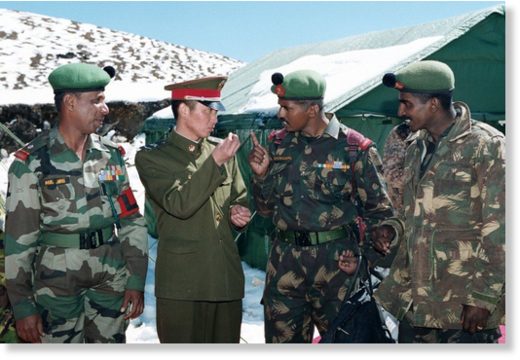 It’s significant that a former Northern Army commander told The Hindu, “Normally stand-offs happen in a local area, but are resolved at the local level.” That pretty much sums up the whole state of affairs along the India-China border and also the India-Pakistan border.

Yet now, added the commander, there seems to be a “higher level in China” in terms of planning, so the skirmishes should be handled diplomatically. Indian Prime Minister Narendra Modi is reviewing the current LAC situation.

Beijing has been mostly quiet about it. Yet the Global Times seems to be distilling the predominant Chinese narrative: India’s poor “are facing an increasingly severe threat of famine.

“Against such a backdrop, it is conceivable that hyping border tensions at this juncture will flare up nationalist sentiment and increase domestic hostility toward Chinese capital, putting unnecessary pressure on bilateral trade and dealing a further blow to the Indian economy already plagued by downturn woes.”

Global Times insists China “clearly has no intention of escalating the border disputes with India,” and prefers to stress the “overall improvement” of their “bilateral economic and trade ties.”

The usual divide-and-rule suspects, for their part, prefer to speculate on the possibility of an India-China LAC mini-war. That’s not likely to happen.

Indian National Security Advisor Ajit Doval and Chinese Foreign Minister Wang Yi, billed as special representatives of India and China, met face to face for the last time in December 2019, discussing an “early settlement of the boundary question.” It looks like they will soon have to meet again.

Video shows missile trail that may be Turkey’s test of S-400, prompting warning from US — Puppet Masters — Sott.net