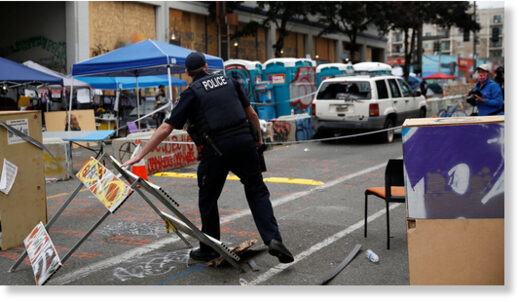 © REUTERS/Lindsey Wasson
A Seattle Police officer trying to secure a crime scene after a fatal shooting in the CHOP/CHAZ zone, June 29, 2020.

Two African-Americans have been killed and two more seriously injured in the so-called CHOP zone of Seattle, Washington. City authorities continue to pretend everything is fine, because apparently only some black lives matter.

Set up by Black Lives Matter protesters and their self-described Antifa “allies” on June 10, the zone was initially known as Capitol Hill Autonomous Zone (CHAZ) before it was renamed Occupied Protest (CHOP), apparently in a reference to the French revolutionaries’ beheading spree that preceded the rise of Napoleon Bonaparte. It is centered on the East Precinct, abandoned by Seattle PD on orders from Chief Carmen Best and Mayor Jenny Durkan.

Over the past three weeks, however, four black men have been shot – two of them fatally. The latest incident happened in the early hours of Monday, and claimed the life of a 16-year-old African-American male, while a 14-year-old is in the hospital in critical condition, according to the Seattle PD. The white Jeep Cherokee they were in was found riddled with bullets on 12 Avenue between Pike and Pine – just outside the East Precinct.

Chief Best said the crime scene had been tampered with, and that police had no luck interviewing witnesses as “people are not being cooperative with our requests for help.”

Monday’s incident was the second fatal shooting since the establishment of the zone. On June 20, a 19-year old African-American man was shot and killed inside the zone. Another man, of unknown age, was hospitalized with “life-threatening injuries.”

“It’s very unfortunate that we have another murder in this area identified as the CHOP,” Chief Best said Monday, according to Seattle’s KOMO radio. “Two African-American men… dead at a place where they claim to be working for Black Lives Matter but they’re gone. They’re dead now.”

Within just a day or two of the CHAZ/CHOP springing up, one activist had organized an armed militia to “keep order” inside the zone. The same “warlord” later live-streamed himself handing out rifles to followers, including minors. Libertarians hoping for proof of a self-organized citizenry maintaining order without the state were quickly disappointed, though, as the zone became a might-makes-right festival of lawlessness.

That’s quite different from how Mayor Durkan initially described the zone. She first called it a “summer of love,” even when protesters barged into city hall and demanded her resignation. When President Donald Trump objected to the chaos and lawlessness, Durkan snapped back, “Seattle is fine. Don’t be so afraid of democracy,” to praise from mainstream media and Democrats.

After last week’s shooting, Durkan tried to shut the zone down. When push came to shove, however, she got cold feet. Heavy machinery sent to dismantle the barricades set up around CHOP – yes, the activists demanding the abolition of “racist” immigration enforcement (among other things) literally built a wall around their territorial claim – were stopped by protesters who laid down in the street before them. City workers retreated after a two-hour standoff.

President Trump has come under severe criticism from his own party for not cracking down on CHOP, letting such a challenge to legal order fester for weeks. At a recent rally in Oklahoma, he told his supporters that such lawlessness merely serves to demonstrate to America what would happen if Democrats take power in November.

He took flak for this, most notably from Fox News host Tucker Carlson, who pointed out that law can’t be selectively enforced lest it collapses entirely.

Cynical as it may sound, Trump’s plot appears to be working. While local residents publicly proclaim their support for the protesters and their goals – wouldn’t you, given the circumstances? – they are increasingly not on board with the demand to abolish the police.

“It’s not a summer of love – not anymore. We need to get some law and order back in the community,” one local resident, who only gave his name as Joe, told KOMO radio. “Taxation without protection is theft, and right now we don’t have any protection in this neighborhood.”

The obvious response to these deaths and woundings of African-American men would be to dismantle the CHOP and restore the rule of law equally applicable to everyone. That would assume the protests and riots across the country have really been about black lives mattering, however.

Nebojsa Malic is a Serbian-American journalist, blogger and translator, who wrote a regular column for Antiwar.com from 2000 to 2015, and is now senior writer at RT. Follow him on Twitter @NebojsaMalic