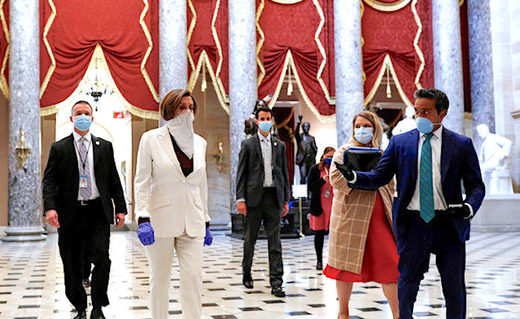 The US Congress has passed a nearly $500 billion Covid-19 aid package, as House Democrats voted to set up a panel to look into the administration’s handling of the outbreak – a move blasted as “purely political” by the GOP.

The relief bill passed overwhelmingly by 388-5 after hours of debate on Thursday, securing the needed two-thirds majority and seeing only four Republicans and one Democrat vote in opposition. The aid package will immediately infuse $321 billion into the Paycheck Protection Program to ensure companies can pay their workers, while providing another $75 billion to hospitals, $60 billion in emergency loans for small businesses and $25 billion set aside for coronavirus testing.

Progressive stalwart Ocasio-Cortez broke ranks with her party over concerns that the aid package would not be enough, stating lawmakers were

“‘abdicating [their] responsibility’ to Americans. Every time we pass one of these bills, we are hearing that the real solution is coming in the next bill and the next bill. Two months of rent are going to pass by before we are actually entertaining a real bill,”

she told MSNBC ahead of the vote.

Observing strict safety protocols, the representatives cast their votes in groups of about 60 at a time, with lawmakers waiting in their offices to be called in alphabetical order to avoid potentially spreading the lethal virus around the chamber.

Though lawmakers agreed to stand six feet apart to follow social distancing guidelines, a sergeant-at-arms officer was seen asking several lawmakers to create extra space between them, none of whom wore masks.

Taking a hard swipe at Democratic House Speaker Nancy Pelosi after the vote, the National Republican Congressional Committee sent out a tweet dubbing her “Nancy Antoinette” in a play off of a recent Trump campaign ad, which criticized the speaker for being out of touch with the desperate circumstances many Americans have now found themselves in after she showcased a freezer full of expensive ice-cream as part of her lockdown prep.

Before passing the aid package, House Democrats moved to launch a new investigative panel to probe the Trump administration’s response to the coronavirus pandemic, voting 212-182 along party lines to create the new mechanism with Republicans arguing that the panel is an attempt by the Democratic Party to politicize the fight against the epidemic, pointing to several House committees with far-reaching oversight powers already existing.

The newly-established panel will have sweeping authorities to investigate how federal funds are being used on relief efforts, including the ability to issue subpoenas.

The move came one day after a federal whistleblower – Rick Bright, Director of the Biomedical Advanced Research and Development Authority (BARDA) – came forward with allegations that he was demoted from his position for rejecting the administration’s stance on certain treatments and drugs which Bright deemed “unproven.”

Republicans tore into the new panel, with House Minority Leader Kevin McCarthy (California) insisting it had nothing to do with oversight. “It sounds like pure politics,” he told Fox, adding “Let’s take care of the crisis at hand right now. We have five different oversights already looking at this.”

McCarthy and other GOP opponents pointed to House committees that already have jurisdiction over the coronavirus response, including the Oversight, Ways and Means, Energy, Financial Services, Education and Labor committees, arguing there was sufficient oversight as it is. The original $2.2 trillion relief package also included a number of oversight measures, they said. US President Donald Trump also slammed the move, insisting it was no time for “endless partisan investigations” or “witch hunts.”