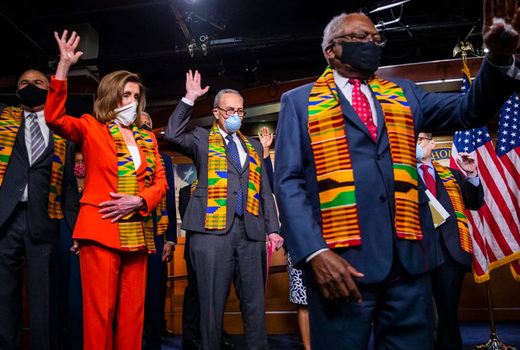 The “Justice in Policing Act of 2020” aims to increase transparency and limit abuses after unrest over Floyd’s May 25 death when Minneapolis Police Officer Derek Chauvin kneeled on his neck until he died.

“The martyrdom of George Floyd gave the American experience a moment of national anguish as we grieve for the black Americans killed by police brutality,” House Speaker Nancy Pelosi (D-Calif.) said at a press conference.

“In the Senate, Democrats are going to fight like hell to make this a reality,” said Senate Minority Leader Chuck Schumer (D-NY).

Pelosi said in response to a reporter’s question that she does not support abolishing police, a position that’s gained momentum among many Democratic politicians following protests, but said she could support “rebalancing some of our funding” so that issues such as mental health would be handled “more directly” rather than by police.

Pelosi said in response to a reporter’s question that she does not support abolishing police, a position that’s gained momentum among many Democratic politicians following protests, but said she could support “rebalancing some of our funding” so that issues such as mental health would be handled “more directly” rather than by police.

“We want to work with our police departments,” Pelosi said, while later saying additional measures are “a local decision.”

The bill calls for sweeping reforms to law enforcement, including tracking “problematic” officers through a national misconduct registry and limiting the safeguards in place keeping officers from facing legal or civil action in court. Those safeguards are also known as “qualified immunity,” which protects officers from individuals who seek to recover damages “when law enforcement officers violate their constitutional rights,” according to an outline of the proposal.

A majority of the Minneapolis City Council over the weekend vowed to abolish the local force. In DC, activists were irked when Mayor Muriel Bowser, who proposed increased police funding, painted “Black Lives Matter” on a street outside the White House, saying she wasn’t going far enough. They painted “Defund the Police” alongside it.

President Trump condemned Floyd’s killing, but he also has criticized local leaders for not doing more to crack down as protests gave way to violence, theft and property damage. He denounced the push to reduce police, tweeting Monday: “This year has seen the lowest crime numbers in our Country’s recorded history, and now the Radical Left Democrats want to Defund and Abandon our Police. Sorry, I want LAW & ORDER!”

Pelosi called the new bill a “first step.” It would forbid use of chokeholds and ban police from conducting no-knock raids when serving drug warrants. A no-knock raid in Kentucky resulted in the March death of Breonna Taylor, whose case also was widely protested last week. The black, 26-year-old EMT had been sleeping with her boyfriend on March 13 in her Louisville, Ky., home when three plainclothes officers burst in on a no-knock warrant. She was accidentally shot eight times.

The bill seeks to increase the independence of use-of-force investigations and available data, including a national registry of individual officers’ conduct, and lower the threshold to federally prosecute officers if they exhibit a “reckless disregard” for someone’s life. It also proposes curtailing the transfer of surplus military equipment to local and state agencies.

Floyd’s death yielded widespread condemnation from both Democrats and Republicans, including from Trump and Senate Majority Leader Mitch McConnell (R-Ky.). But specific items of police reform in its wake are likely to be hotly debated. Most legislation that passes Congress does so after party leaders broker deals.

House Minority Leader Kevin McCarthy (R-Calif.) last week said he was willing to work with Democrats on policing reforms, but the new bill was introduced without negotiations. 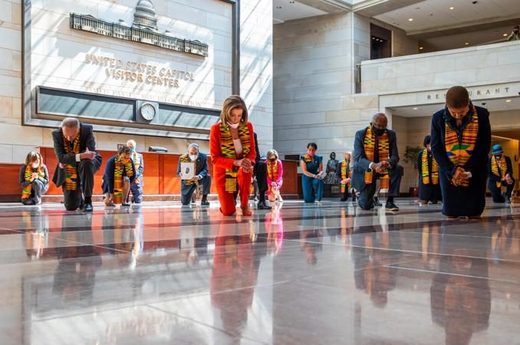 © AP/Manuel Balce Ceneta
House Speaker Nancy Pelosi and other members of Congress kneel and observe a moment of ‘reflection’ at the Capitol’s Emancipation Hall.

Chauvin, who was fired, is charged with second-degree murder, and three also-fired colleagues face aiding and abetting murder charges.

Black lawmakers said the new federal legislation was personal. “We arrived on these shores in 1619 in shackles … all we have ever wanted is to be treated equally,” said Rep. Hakeem Jeffries (D-NY), who allowed that “there are very good police officers and there are bad ones.”

“We’re here because black Americans want to stop being killed. Just last week, we couldn’t even pass an anti-lynching bill in the United States Senate,”

Harris referred to an anti-lynching bill stalled by Sen. Rand Paul (R-Ky.), who argues it could unintentionally make federal crimes out of conduct that doesn’t result in serious injury or death.

“We have confused having safe communities with hiring more cops on the street. The real way to achieve safe and healthy communities, is to invest in those communities … Many in America right now already live in places with minimal police presence.”

Democrats said they were optimistic about the bill becoming law.

House Judiciary Committee Chairman Jerry Nadler (D-NY), the only Democrat not to kneel at the event due to health issues, said,

“You’ve heard the terrifying words, ‘I can’t breathe’ from George Floyd, from Eric Garner, from the millions of Americans in the streets calling out for revenge, for change. Our hearts ache for the loss of George Floyd.”

This is why Trump called mainstream media ‘enemy of the people’ — Society’s Child — Sott.net