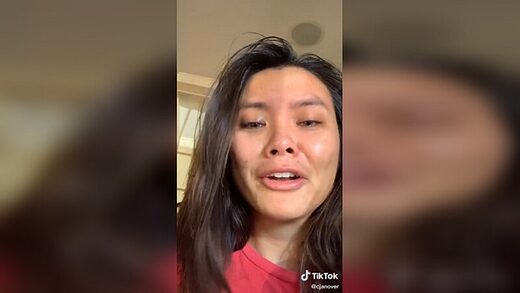 A Harvard graduate has reportedly lost her job after posting a now-viral TikTok video in which she vowed to assault anyone who didn’t support the Black Lives Matter (BLM) movement. The internet had mixed feelings about her firing.

Claira Janover became an overnight sensation after several news outlets caught wind of a video in which she threatened to attack anyone “entitled” enough to believe that “all lives matter.”

“I’ma stab you, and while you’re struggling and bleeding out, I’ma show you my paper cut and say, ‘My cut matters too,'” she declared in the TikTok clip.

The video sparked pandemonium on social media, and according to Janover, uprooted her life. In a follow-up message, the recent Harvard graduate said she had been fired by Deloitte, an international accounting firm, over the stabbing threat. In it, she claimed the threat wasn’t literal but rather an “analogous joke.”

Holding back tears, Janover said she’d “worked really hard” to receive a position at the company, and complained that her contract had been terminated even though Deloitte claims to “stand against systemic racism.”

She blamed her sudden misfortune on “Trump supporters” and said her future has been “completely compromised” by the incident. Despite the setback, she insisted she was “too strong” for “racist Trump supporters” and would continue to use social media to advocate for social justice.

The internet was split over Deloitte’s decision to ax her. Andy Grewal, a professor at Iowa Law School, said he was not a “fan” of Janover’s initial video, but she didn’t deserve to be fired over it.

Others warned that Deloitte would suffer financially for firing an employee “speaking up” for Black Lives Matter.

Hey @Deloitte@DeloitteUS did you just fire a young woman for speaking up for #blacklivesmatter after a swarm of Trumpers called for you to do so? In this economy?

However, there were plenty of commenters who said Janover’s fate was richly deserved.

Her follow-up video shows her to be “mentally unstable” and unwilling to take personal responsibility for her actions, argued similarly amused observers.

Janover’s firing is unusual as it marks a rare case of ‘reverse’ cancel culture. Social-justice activists have typically been the ones using social media to attack anyone who is suspected of holding politically incorrect views.

Last month, the chair of the University of British Columbia’s board of governors stepped down after a student group publicized that he had retweeted posts by Donald Trump and messages critical of BLM. Similar campaigns have forced apologies and resignations from a multitude of celebrities and public officials.