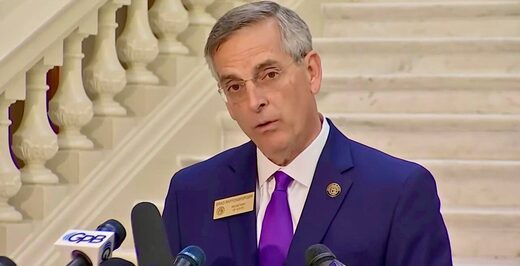 “We stand ready to answer each and every question out there,” Raffensperger said. “Every Georgian should have faith in our elections.”

The audit should take two weeks to complete according to Raffensperger.

Georgia officials will conduct a signature-match audit of absentee ballot envelopes in Cobb County to promote faith in the election system ahead of next month’s U.S. Senate runoff elections, Secretary of State Brad Raffensperger announced on Monday.

The audit comes in response to a “specific allegation” the mail-in signature verification process was not followed properly in Cobb for the Nov. 3 general election, Raffensperger said at a news conference. He did not give details on the allegation.

Re-checking the envelope signatures in Cobb also aims to boost confidence in the integrity of the high-stakes Senate runoffs on Jan. 5 amid fraud claims from President Donald Trump and his allies that have injected doubt into Georgia’s election system, Raffensperger said.

The Democrats used Covid as a vehicle to flood the 2020 election with record number of absentee and mail-in ballots in order to steal the election.

President Trump was ahead of Joe Biden in Georgia by 110,000 votes on election night when corrupt Democrat elections official stopped counting ballots at 10:25 PM and kicked out GOP observers from the State Farm Arena tabulation center.

A couple weeks ago Trump’s legal team showed a video from the State Farm Arena tabulation center when poll workers were told to leave at 10:25 PM.

A few “workers” stayed behind and were seen pulling suitcases full of ballots out from under tables to be tabulated!

“These difference ballots included a slight depressed pre-fold so they could be easily folded and unfolded for use in the scanning machines. There was no markings on the ballots to show where they had come from, or where they had been processed. These stood out.”

“In my 20 years’ of experience of handling ballots, I observed that the markings for the candidates on these ballots were unusually uniform, perhaps even with a ballot-marking device. By my estimate in observing these ballots, approximately 98% constituted votes for Joseph Biden. I only observed 2 ballots as votes for President Donald J. Trump.”

Why did Raffensperger wait until the electoral college voted to announce a signature audit?

Cristina Laila began writing for The Gateway Pundit in 2016 and she is currently the Associate Editor.