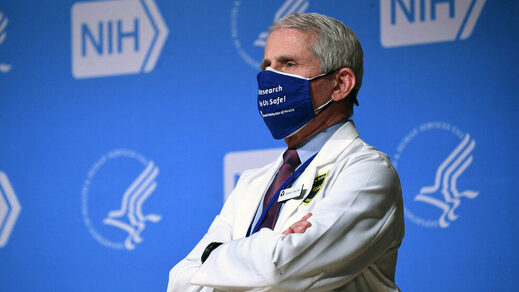 Wayne Dupree was invited to the White House to talk to President Trump on messaging to the black community. He was named in Newsmax’s top 50 Influential African-American Republicans in 2017, and, in 2016, served as a board member of the National Diversity Coalition for Donald Trump. Before entering politics, he served for eight years in the US Air Force. His website is here: www.waynedupree.com. Follow him on Twitter @WayneDupreeShow

Most Americans are exasperated, tired of all the uncertainty and long for life to return to normal. But will the powers-that-be ever allow us to?

During an interview with CNN, Dr. Anthony Fauci, the director of the National Institute of Allergy and Infectious Diseases, announced that Americans might need to wear masks until sometime next year, and that he couldn’t predict when things in the US will return to normal.

“You and the president have suggested that we’ll approach normality toward the end of the year. What does normal mean? Do you think Americans will still be wearing masks, for example, in 2022?”

“You know, I think that may be the case. And again, it really depends on what you mean, by normality… because if normality means exactly the way things were before we had this happen to us, I mean, I can’t predict that.”

What a turnaround. At the outset of the pandemic, Fauci said masks didn’t work. Then he U-turned, and supported their use and goggles. A couple of weeks ago, he even suggested that it might be better to wear two or three masks. Now he says we will all be wearing masks for another year. Anyone who listens and believes this Democrat hack should have their heads examined.

See, this is how the government (and the radical left) plays the game. Fauci’s answer to this question should have been a simple “No.” But instead, he wants to redefine normal so that he doesn’t have to say that scary word or illuminate the real plan here. Constantly redefining what “normal” is hides the future state from people – it’s a perpetually moving target for these people so that they can continue their controls. “Getting back to normal” is an unachievable goal when you move the lines you’ve drawn, which is exactly what they want. When the definition of something doesn’t meet the government’s criteria, they change the definition. Gender, racism, and now ‘normal’ have all seen this paradigm shift in their definitions to fit their narrative.

No snark intended here, but has Fauci done anything in this pandemic to help the public? He has offered no real meaningful or consistent guidance that you couldn’t have received from your mother. If you think his media presence has helped to calm some scared people, perhaps I will concede that; but what has he done to help the public through this last year-plus?

This is absolutely nothing more than a power play, and they need to be called out on it. We could have been back to normal a year ago had these people not decided to exploit this minor crisis for power.

This is a campaign of fear and control. We should not tolerate this baseless authoritarianism. What’s the point of the vaccine if we have to keep wearing a mask and stay isolated? If they are afraid of what might happen when vaccinated people come into contact with the virus, we shouldn’t be getting the vaccine.

I think, in the beginning, there was merit to masks, but once most people are vaccinated later this summer, it will no longer be about safety but rather control. Has CNN interviewed any other ‘experts’ for their opinion on when the masks will come off?

Our real Covid problem will be convincing people to live their lives normally again.

Yesterday, I was on our biweekly family Zoom call, and we were discussing the virus and the vaccines. My 78-year-old cousin (he and his wife are very paranoid about the disease even though they are in exceptional health for their ages), commented that Covid “is a death sentence.”

I generally don’t like to stir things up on these calls, but I couldn’t let that one pass by, so I said, “Wait a minute, you can’t say that having Covid is a death sentence.” And he snapped back at me, “Tell that to the 450,000 who died!”

Now how do you respond to that (except to say, he’s wrong, it’s closer to 500,000 deaths)? I only bring this up to illustrate how libs (he and the rest of the family, who didn’t say a word, are all libs) operate on emotional arguments that you can’t win. You sound like a heartless monster if you even try.

I get it that no one exactly knows how this all works, but for over a year now, the media has waited with bated breath for Dr. Fauci’s words of wisdom. And he changes his rhetoric and recommendations on an almost daily basis with no repercussions, and no questions asked. I have about as much faith in what he says as any quack doctor. Go away and get out of my life.

History will pass its verdict on how this virus was handled – and other than Trump’s “Warp Speed” initiative (which even Fauci’s boss has praised), none of it will be very favorable.