The promise of bloodshed coming alongside or following shortly after is an historic certainty. The symbols of a people never satisfy: People themselves must always come next. 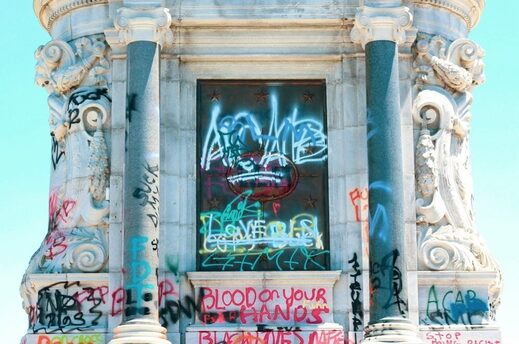 For millennia, King Mob has targeted societies’ icons with varied goals and to varied ends, and few things are more foreboding than his desecration of civic art. Just as the targets have ranged from rulers to clergy, from tyrants to helpless, and from the guilty to the innocent, the outcomes have ranged from victory to defeat depending on the society’s strength and will. The promise of bloodshed coming alongside or following shortly after, however, is an historic certainty. The symbols of a people never satisfy: People themselves must always come next.

In 1790, mobs looted and pillaged Paris’s treasured Notre Dame. To the revolutionaries, the cathedral symbolized everything that was wrong with France’s history and society — a history of kings, tradition and religion, and a society beset by royal injustice and systemic inequality.

Over the next three years, the 12th-century church’s riches and artifacts were stripped, stolen, and destroyed, their remnants hidden by the faithful and sold off by the faithless. Statues of the Virgin Mary were removed and statues to the Goddess of Liberty took their place on desecrated altars.

At nearby Sainte-Chapelle, the revolution pulled the apostles from the pedestals where they had stood watch over Christ’s Crown of Thorns. The 12 statues were vandalized and buried — half so badly they are still undergoing attempts at restoration. As the destruction of religious art unfurled, priests who did not swear allegiance to the new order and those who aided them were sentenced to death.

Back at the cathedral, the revolutionary government mistook the 28 statues of the kings of ancient Judah for French kings (rich old men and all), dragging them into the public square for decapitation. Their buried heads were not rediscovered for nearly 200 years.

In the Place de Louis XV, the large statue of the square’s namesake was torn down and the plaza renamed Place de la Revolution. A guillotine was raised, and the “liberated” space would see the execution of more than 1,200 prisoners, from King Louis XVI and his wife to the executions’ ringleader himself, Maximilien Robespierre.

Seventeen hundred years before, Pliny the Younger described Emperor Domitian’s golden statues “rudely battered down, and made a sacrifice to public joy” amidst his toppling and assassination.

It was a sport and pastime to humble those [statues’] exalted heads, to make them prostrate and kiss the ground, to maul them with hammers, to hew them with hatchets, as if at every stroke blood and pain had been to follow. None was so moderate in the venting of his raptures, none so sober in his overflowing joys, but that he thought it a luscious piece of revenge to see their mangled limbs, their dissevered joints, and finally their grim and ghastly images divested of all their borrowed majesty, and thrown into the flames to be melted down into better use and service.

In the United States, mob vandalism began in 2017 with a statue of an unnamed Confederate soldier, escalating to Confederate officers and Gen. Robert E. Lee, who died a nationally recognized champion of peaceful American reconciliation. When critics, including President Donald Trump, worried the iconoclasm would continue to Thomas Jefferson and George Washington, they were mocked by left-wing reporters, columnists and hosts, from the once-respected New York Times to the poncy and excitable John Oliver.

“I’ll tell you where it stops,” the Comedy Central talker yipped: “Somewhere! Any time someone asks ‘Where does it stop,’ the answers’ always f — ing somewhere. You might let your kid have Twizzlers, but not inject black tar heroin. You don’t just go, ‘Well, after the Twizzlers, where does it stop?'”

But rioters are not children with candy, and less than three years later statues of Washington and Jefferson were defaced and torn from their pedestals. The World War II Memorial to America’s actual anti-fascists was spray-painted, along with the Lincoln Memorial. A northern abolitionist boycotted in the South was splashed with blood-red paint and had a noose hung around his neck.

A relief of heroic black Union soldiers was vandalized, the hero of the Union Army was torn from his slab, and a monument to three black victims of racial violence was defiled. A statue of Saint Junípero Serra was pulled down days later, with one supporter calling for his bones to be dug up and desecrated.

Sacred religious statues depicting Christ as light-skinned “are a form of white supremacy… Tear them down,” race-baiting activist Shaun King wrote Monday afternoon. “All murals and stained glass windows of white Jesus, and his European mother, and their white friends should also come down.”

On Friday, a statue of a Confederate soldier was strung up and hanged from a lamppost in a ghastly warning of things to come.

Policemen and reporters have been attacked, while mayors and journalists have defended the riots as “mostly peaceful.” When an historic church across from the White House was set ablaze, its leader welcomed the mob and decried the president. She was joined in her outreach by Washington’s Catholic archbishop, and the mayor named the street after the mob. Monday night as I write, her church has been freshly defaced and the mob has declared the mayor’s street their “autonomous zone.”

The same evening across the country, the second shooting in just days led the mayor of Seattle to announce the mob’s armed and walled “autonomous zone” would be dismantled. For the previous two weeks, the mayor had withdrawn police from the precinct station and surrounding area, ceding downtown to King Mob to victimize and terrorize small business owners and each other at will.

“Does anybody here know what happened to the people who did not get on board with the French Revolution?” a member of the mob shouted into a megaphone a week prior.

A society that believes in itself builds monuments, a sick society does not, and a dying society watches as they are torn down. While Roman kings, French monks, American Tories, and Russian tsarists were unable to defeat the revolutions that first tore down their symbols, today in the United States we are simply unwilling.

The increasingly violent mobs in our streets are chanting for it, and the revolts of human history have come to it every time. You can be sure the ghost of King Mob will see it done. He always does.

Christopher Bedford is a senior editor at The Federalist, the vice chairman of Young Americans for Freedom, a board member at the National Journalism Center, and the author of The Art of the Donald.

‘We could cut off the whole relationship’ — Puppet Masters — Sott.net

Beijing says US is pushing China to ‘brink of a new Cold War’ — Puppet Masters — Sott.net