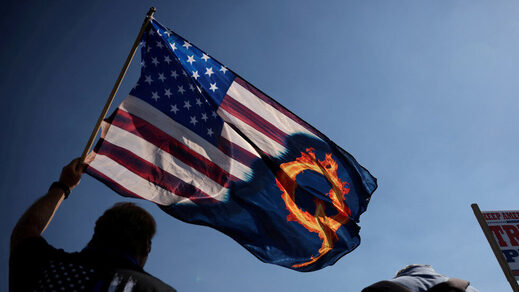 © Carlos Barria/Reuters
Trump supporters with a QAnon flag at an Oregon rally in September, 2020

It’s clear that gullible people do not have a monopoly on the promotion of conspiracy theories. The elite’s scaremongering about QAnon is designed to increase fear of the far right and drive demand for more aggressive policing.

Michelle Cottle, who is a member of the New York Times editorial board, recently highlighted an example of the favourite conspiracy theory peddled by the mainstream US media. Her opinion piece, ‘Don’t Let QAnon Bully Congress’, comes with the warning that “steps must be taken to safeguard the seat of government.”

Cottle, like many of her colleagues, is devoted to a conspiracy theory that evokes an over-the-top drama about a supposedly insurrectionary threat posed by members of QAnon. Citing the acting chief of the Capitol Police, who has warned that extremists are talking about blowing up the Capitol during President Biden’s first address to a joint meeting of Congress, she pleads for more security.

The threat posed by the influence of the fringe conspiracy theory of QAnon has been seized upon by elite practitioners of the politics of fear to promote a mood of alarmism and insecurity. There is no data on QAnon, or on the numbers of its insurrectionary members. Cottle’s alarming scenario of a “lunatic fringe” dreaming of a “bigger, bloodier encore” has been memed into existence by so-called terrorism experts, think tank operatives and, of course, members of the editorial board of the New York Times.

The recently invented narrative about the threat posed by QAnon casually portrays this movement as a synthesis of white nationalist extremists, religious fundamentalists, and ISIS-type fanatics. Colin Clarke, who serves as an expert on extremist violence at the Soufan Center, asserts that there is a crossover between QAnon and different religious extremists. He also warned that “QAnon has the potential to be bloodier & more destructive than other ‘types’ of terrorism.”

Clarke’s invention of a new type of unusually bloody and destructive terrorism resembles the evocation of a new brand of ‘hyper-terrorism’ manufactured by experts in the 1990s.

His scaremongering about the unprecedented danger posed by this new type of terrorism is widely echoed by the American terrorism industry. Predictions that extremism is going to be more violent serve as an argument for the demand for the greater militarisation of policing.

The self-conscious exaggeration of the influence of QAnon is integral to the wider project of sensationalising and vastly inflating the threat posed by insurrectionary far-right extremists. 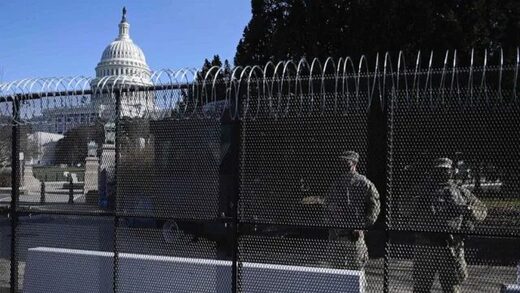 The use of the term ‘insurrection’ to describe the angry mob of disorganised people who invaded the Capitol is instructive in this respect. Numerous media outlets referred to these people as part of an organised attempt at a coup. The narrative of insurrection was used earlier this month, when officials claimed that they had received information of a possible plot to breach the Capitol on March 4 by QAnon-inspired militias. As far as FBI and Homeland Security officials are concerned, the fact that this attack did not occur is no reason for complacency. The threat posed by QAnon constitutes a clear and present danger.

I am not sure whether American terrorism experts and security officials actually believe their fantasy depiction of the threat posed by QAnon. However, if some of them do, a reality check is in order.

Firstly, there was no coup attempt to overthrow the American government. A coup attempt involves an organised purposeful project of seizing control of the government. The people who invaded the Capitol Building are best described as a mob who more or less blundered into it. They did not have to do very much to breach it.

Some of the intruders were violent, but many of them were pre-occupied with taking selfies, and their actions resembled the behaviour of tourists on an adventure holiday. This invasion is most accurately described as an act of politically motivated violence.

That there was no coup plan is indicated by the failure of federal prosecutors to concoct a case. The authorities have been desperately looking for evidence of pre-planned organisation and conspiracy.

Secondly, the invaders were not a group of organised, armed insurrectionists. Out of a crowd of tens of thousands of people, there were only three arrests for people carrying weapons without a licence. The description of this event as an ‘armed insurrection’ by Democratic Party politicians is a self-serving falsification of the truth.

Of the near-300 people who were arrested from the Capitol, just over one in ten were affiliated with militia or far right groups such as the Proud Boys, Three Percenters, or the Oath Keepers, according to a University of Chicago study. These people can be described as demonstrators and rioters, but not as organised extremists.

No doubt there are millions of frustrated Americans, some of who are fascinated by the conspiracy tales associated with QAnon. But branding these individuals as bloodthirsty terrorists constitutes a dangerous distortion of reality. This distortion is integral to an officially sanctioned conspiracy theory that serves the project of promoting the politics of fear. Given the resources that support it, this conspiracy theory is far more insidious than that of QAnon.

Frank Furedi is an author and social commentator. He is an emeritus professor of sociology at the University of Kent in Canterbury. Author of How Fear Works: The Culture of Fear in the 21st Century. Follow him on Twitter @Furedibyte