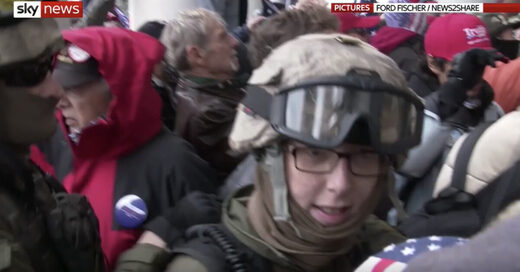 Update – February 22, 6:39 p.m.: In a follow-up motion, the defense walked back their claim that client Jessica Watkins “met” with Secret Service on January 6. From a new motion:

A better verb would have been “encountered.” Ms. Watkins spoke with Secret Service members early in the day when she was coming through the check in point for the VIP area. The point counsel was attempting to make was that she encountered law enforcement, including Secret Service officer on her way to providing security for the rally. She was given directives about things she could and could not do, including directions to leave all tactical gear outside of the VIP area, and she abided by all of those directives. Ms. Watkins does not suggest that she has any direct knowledge that her role as security was sanctioned by anyone other than people involved in organizing the rally. She certainly did not mean to suggest that she was hired by the U.S. Secret Service to perform security.

Our original article is below. We’ve added the new motion at the bottom.

The defense for Jessica Watkins, one of the “Oath Keepers” charged in the siege of the U.S. Capitol Building, say she should be released to home confinement because prosecutors showed no evidence she engaged in violence that day. She was there to protect speakers at a rally that preceded the riots, had a VIP pass to the rally, and met with Secret Service agents, the motion stated.

“On January 5 and 6, Ms. Watkins was present not as an insurrectionist, but to provide security to the speakers at the rally, to provide escort for the legislators and others to march to the Capitol as directed by the then-President, and to safely escort protestors away from the Capitol to their vehicles and cars at the conclusion of the protest,” the motion stated. “She was given a VIP pass to the rally. She met with Secret Service agents. She was within 50 feet of the stage during the rally to provide security for the speakers. At the time the Capitol was breached, she was still at the sight of the initial rally where she had provided security. The government concedes that her arrival at the Capitol was a full 40 minutes after the Capitol had been breached.”

Supporters of then-President Donald Trump raided the Capitol Building on January 6 after he continued to lie that he actually won the 2020 presidential election, and that it was being stolen from him. Rioters postponed but did not prevent Congress from counting electoral college votes weighing in favor of winner Joe Biden. Five people died amid the chaos, however: four Trump supporters and one Capitol police officer. Another Capitol officer, a D.C. Metro officer, and a siege defendant died by suicide mere days after the incident.

Watkins is charged as one of nine people recently indicted for conspiracy in connection to the siege. They were described as members of the Oath Keepers, a far-right paramilitary organization known for recruiting veterans into their ranks. Watkins fits the bill as an Army vet, described in court documents as a “self-described “C.O [Commanding Officer] of the Ohio State Regular Militia.”

According to authorities, Watkins told a recruit in a text on November 9, 2020, that she needed this person “fighting fit” by Inauguration Day.

“I can’t predict,” she allegedly said. “I don’t underestimate the resolve of the Deep State. Biden may still yet be our President. If he is, our way of life as we know it is over. Our Republic would be over. Then it is our duty as Americans to fight, kill and die for our rights.”

“Watkins’s premediated and coordinated conduct created an unprecedented danger, the effects of which continue to reverberate throughout this city and nation — and which demonstrate that there are no conditions of release that can reasonably assure the safety of the community,” the D.C. U.S. Attorney’s Office argued in a 21-page memo to keep her detained. “[The] Court should thus detain Watkins pending trial.”

The defense said that prosecutors showed no evidence Watkins did anything violent on January 6. Indeed, they assert video may show that she was a deescalating presence that day.

“The government’s assertion that Ms. Watkins ‘joined a violent mob’ to ‘forcibly stop the results of a Presidential Election from taking effect’ is belied by the fact that she made no efforts to seek out lawmakers, she did not enter the Senate Chambers, she followed the instructions of law enforcement she encountered, and she helped to rescue and treat injured individuals,” the motion states. “While counsel does not yet have access to all of the discovery in this case, we have every reason to believe there is considerable exculpatory evidence including BWC footage of her interacting with law enforcement in a peaceful, law-abiding way, footage of her directing a protester to get off of a police swat vehicle, footage of her telling people not to destroy property, and footage of her providing medical assistance when needed.”

The suggest innocent interpretations against a number of the evidence against her, even dismissing the aforementioned November comments.

“The government includes statements Ms. Watkins is alleged to have made about the election and the need to fight, kill, or die for rights and statements about being prepared to fight hand to hand,” the motion states. “However, these statements if made, were made in November, shortly after the election in the wake of the then President’s heated rhetoric about the election being stolen. They are not even alleged to have been made about the January 6 events. The statements were not directed towards law enforcement and are as easily interpreted as being prepared to encounter violent counter-protesters as they had on earlier occasions.

In a bid to counter the allegation that she is antigovernment, her defense described her as a former member of the military who voted for former President Barack Obama, and that she “believes in the sanctity of the government and the importance of law and order, is committed to the safety of law enforcement officers.” They also maintained that they would be susceptible to violence or health risks while in lock up, saying that she was treated horribly as a transgender woman while in local custody: deprived of medical attention, and abused after going on a hunger strike.

You can read the motion here:

Clinton Global Initiative gets behind the total surveillance state and the incitement of citizen-led authoritarianism — Puppet Masters — Sott.net