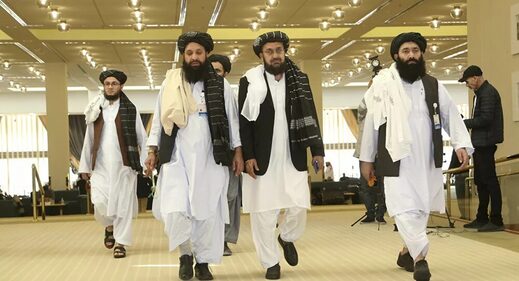 The media firestorm over alleged Russian intelligence collusion with Afghan militants to kill US troops has the hallmarks of a psy-ops orchestrated by America’s Deep State.

The real bounty hunters in this high-risk game are not Russian operatives allegedly directing militant assassins. Rather, it is domestic political enemies of Donald Trump directing US media outlets to hobble his presidency or chances of re-election.

Since his shock election back in 2016, the political establishment and their favored Democrat surrogates along with media affiliates have been unrelenting in trying to crash Trump’s presidency.

Trump may be an odious figure of dubious character. He’s a plutocrat and demagogue accused of harboring racist tendencies.

Nevertheless, there seems little doubt that the Deep State have him marked down for sabotage. That’s not Trump being paranoid. The whole non-entity Russia meddling “scandal” which began as soon as he was elected to the White House in November 2016 was the foremost expression of the “resistance”.

You don’t have to be a supporter or apologist for Trump to see that powerful elements of the US ruling class wanted the big-mouth billionaire ousted and the 2016 election result overturned. That’s the fundamental anti-democratic reality of the United States in action.

Under Trump, the US has descended into political and economic chaos.

The coronavirus pandemic and protests over police racial violence have magnified the deep divisions within American society.

Trump has also through his imitable, brash style alienated America’s allies around the world. The transatlantic alliance between the US and Europe has been trashed by Trump over spats about NATO military spending and commercial trade.

The US-led Western political order is splintering apart as is its domestic order. That must be extremely alarming for the US establishment to view the architecture vital for American power projection around the world becoming undone.

Not that Trump is a secret anti-American saboteur. That’s the fantasy stuff peddled by Democrats and pundits who allege that he is a stooge of Russian President Vladimir Putin. No, Trump is simply sabotaging American political authority – inadvertently – at home and abroad because of his clumsy, boorish ignorance. This alarming downward spiral in US image (always overblown but smartly prettified by previous presidents) would explain the latest renewed push by the Deep State to liquidate the Trump presidency.

The claim that Russian military intelligence was running an assassination program against US troops in Afghanistan is designed to be explosive. Moreover, it is further claimed that Trump was indifferent to the alleged information.

But this “journalism” by prominent US media outlets is a gas-lighting psychological operation. Tellingly, there is no evidence provided to substantiate the supercharged claims. It all relies on unnamed anonymous sources.

Trump denies being briefed on the alleged kill program, as reported by media. Russia has panned the bounty-hunter claims, and the Afghan Taliban dismiss them too. Furthermore, the US Director of Intelligence John Ratcliffe and the National Security Advisor Robert O’Brien have confirmed Trump’s version that he wasn’t briefed.

The Pentagon has also come out and said it has seen no evidence to corroborate the “bombshell” claims published by the media and their anonymous “senior official” sources. It seems significant, however, that the psy-ops has gained traction in a desired direction. The salacious claims of Russians colluding in the assassination of Americans and a “treacherous” President Trump have managed to divide Republican lawmakers who are now reportedly increasing their criticism of the White House.

It can also be expected that the highly emotive reported bounty-hunter scheme will undermine Trump’s support among the military ranks.

One of the flimsy pieces of “evidence” cited in US reports of alleged Russian collusion with Afghan militants was the discovery of large amounts of dollars in Taliban bases. How that find is supposed to implicate Russian operatives is a good guess. But if such loose logic can be applied, then why not speculate that the alleged dollars were sourced from US intelligence agencies who wanted fellow Americans killed in order to justify an ongoing Afghan war quagmire – a quagmire that is a two-decade boon for the Deep State and the military-industrial complex?

The way powerful American political and economic forces view it, the Trump presidency threatens US national security from its unleashing of chaos at home and abroad. That’s why for the political establishment, Trump has to go, or at least that he certainly not be re-elected. The latest media gas-lighting psy-ops appears to be aimed at Trump’s own political base to ensure that outcome. In effect that outcome is something the US Deep State is good at – regime change.

Finian Cunningham has written extensively on international affairs, with articles published in several languages. He is a Master’s graduate in Agricultural Chemistry and worked as a scientific editor for the Royal Society of Chemistry, Cambridge, England, before pursuing a career in newspaper journalism. He is also a musician and songwriter. For nearly 20 years, he worked as an editor and writer in major news media organisations, including The Mirror, Irish Times and Independent. Winner of the Serena Shim Award for Uncompromising Integrity in Journalism (2019).

Fauci knew about HCQ in 2005 — nobody needed to die — Puppet Masters — Sott.net

“Hate speech” is suppressed by Facebook before it’s seen by anyone, admits Zuckerberg. — Society’s Child — Sott.net