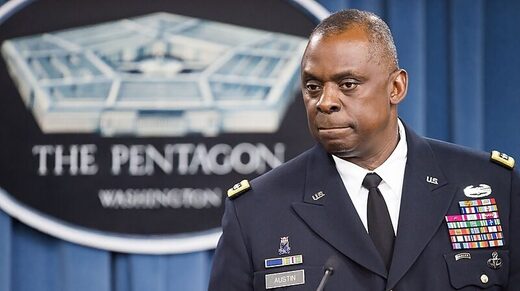 Joe Biden’s pick to be the next Secretary of Defense, according to reports on Monday night, is recently retired Gen. Lloyd J. Austin, III. The choice of Gen. Austin further erodes the once-sacred American norm that military officials will be barred from exercising control over the Pentagon until substantial time has passed after leaving active-duty military service.

Before Gen. Austin can be confirmed, Biden will need a special waiver from Congress under the National Security Act of 1947. That law, a cornerstone of the post-World War II national security state, provides that “a person who has within ten years been on active duty as a commissioned officer in a Regular component of the armed services shall not be eligible for appointment as Secretary of Defense.” Enactment of the law after the war, explained the Congressional Research Service, was imperative to “preserve the principle of civilian control of the military at a time when the United States was departing from its century-and-a-half long tradition of a small standing military.” A 2008 law reduced that waiting period to seven years, but Gen. Austin, who retired from the U.S. Army only four years ago, in 2016, still falls well within its prohibition.

Biden’s choice of Gen. Austin was somewhat surprising in light of the widespread expectation that he would instead tap long-time Pentagon operative Michèle Flournoy, who would have made history as the first woman to run the Defense Department after serving as Obama’s Undersecretary of Defense for Policy, the Pentagon’s highest-ranking woman in history.

But Flournoy’s nomination encountered problems after The New York Times last week said her appointment would present a “test of transparency and ethics” in light of her heavy involvement during the Trump years in a consulting firm, WestExec Advisors, and an investment fund, Pine Island Capital Partners. Those are classic D.C. “revolving door” corporate entities which exploit the access and influence inside the Pentagon and other government agencies of their principals, former top-ranking national security officials, to use their influence within the agencies they once ran to secure lucrative weapons purchases and similar government contracts for their undisclosed corporate clients. These are not just ethical problems of the past; as the Times noted, officials who have done this “bring with them questions about whether they might favor or give special access to the companies they had worked with in the private sector.”

It is hard to believe, though, that Biden’s choice of Gen. Austin was motivated by these kinds of ethical concerns over Flournoy. After all, the sleazy, legalized influence-peddling of Flournoy’s firm has long been known, at least since the investigative journalist Lee Fang revealed many of the details back in 2018 (last week’s Times article added new disturbing facts). Moreover, many of Biden’s key national security appointees were WestExec founders right along with Flournoy, including his pick for Secretary of State, Antony J. Blinken, and his Director of National Intelligence, Avril Hines.

Why would Flournoy’s work with these firms be disqualifying when the identical work of other Biden picks — Blinken, Hines, White House Press Secretary Jennifer Psaki — was not? Moreover, Biden’s picks for top administration positions in general are people who have spent years deeply entrenched in the corporate and lobbyist world that controls the U.S. Government.

And Gen. Austin, apart from the serious civilian-military problem of the National Security Act, is himself a fully entrenched player in this swamp. Since retiring from the Army, the four-star General became, as New York Times reporter Ken Vogel noted, “a member of a private equity fund” — Pine Island Acquisition Corp. — that “invests in defense contractors, and boasts that its members’ ‘access, network and expertise’ are an advantage in government contracting.”

Biden’s choice to lead the Pentagon is also currently a member of the Board of Directors of Raytheon Technologies, the world’s third-largest defense contractor. That means that upon Austin’s confirmation, Raytheon will have a very good friend in charge of the bloated $750 billion annual U.S. defense budget. 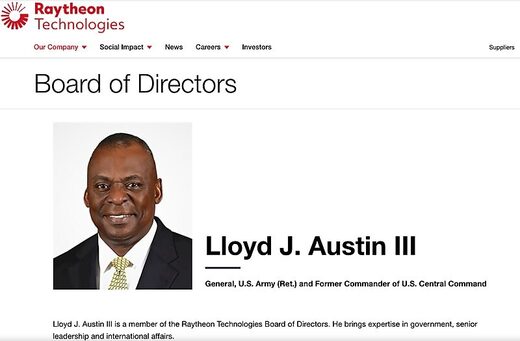 If ethical considerations were not determinative, that leaves the question of why Biden risked a confirmation battle over military control of the Pentagon by rejecting Flournoy in favor of Gen. Austin. According to Politico, race was a major factor: “Biden had been under growing pressure to nominate a Black person to be his defense secretary in recent weeks.” The site had previously reported that “members of the Congressional Black Caucus are urging [Biden] to pick a Black Defense secretary, somewhat dimming hopes that Biden will pick Flournoy, who would be the first female Pentagon chief, for the job.”

Given that 30% of active-duty enlisted men in the U.S. military are African-American, along with 17% active-duty women, it is a reasonable goal to choose the first black American in history to lead the Pentagon. But given how much talk we heard over the last four years of the sanctity of “norms,” this deep erosion of the principle of civilian control over the government and military makes this choice a highly disturbing one.

One of the reasons Trump was repeatedly accused of violating “norms” was his reliance on military officers to run civilian parts of the government, including the Pentagon. So prominent was the criticism that Trump was militarizing the government that the Democrats’ 2020 platform addressed it, vowing — under the title “Renewing American Leadership” — to restore “healthy civil-military relations”:

Democrats believe that healthy civil-military relations are essential to our democracy and to the strength and effectiveness of our military. We will end the Trump Administration’s politicization of the armed forces and distortion of civilian and military roles in decision-making.

Yet even prior to the choice of a recently retired General to run the Pentagon, “Biden’s transition team ha[d] appointed at least four retired generals or admirals and a former top enlisted Marine,” Politico noted. Moreover, during the 2020 election, the Biden/Harris campaign aggressively touted the large numbers of retired military commanders who united to endorse the Democratic ticket; civil-military relations scholar Peter Feaver of Duke denounced this practice to Politico on the ground that they “are trading on the nonpolitical status of the military institution to make that endorsement” — in other words, the same “politicization of the armed forces” which the Democrats’ platform also vowed to end.

While Democrats and liberal pundits complained that Trump was violating this norm of civilian control, they also celebrated his choice of retired Generals for key positions because they believed that those military officials — Secretary of Defense Gen. James Mattis, White House Chief of Staff Gen. John Kelly, National Security Adviser Gen. H.R. McMaster — had better judgment than Trump and, as “the adults in the room,” would serve as a backstop against Trump’s worst impulses.

Worse, many in the media and D.C. professional class cheered outright subversion by military brass and the intelligence community of the policies of the elected President — including when they withheld classified information from Trump, “slow walked” his orders, and deceived him about troop positions to prevent him from leaving Syria. In other words, while the liberal establishment feigned concern over “norms,” including the one that demands civilian control, they applauded military and intelligence sabotage of the president’s policies. (Subversion by the military of democratically elected leaders who, in their judgment, pursue unwise policies is a defining element of a Deep State, something supporters of this subversion simultaneously insisted did not exist in the U.S. and that only conspiratorial crazies could believe it did).

But even with this establishment support for assertion of clandestine and improper intelligence and military power, Trump’s 2017 choice of Gen. Mattis to lead the Pentagon after only a few years in retirement provoked serious concerns, as it was the first time since 1950 that a National Security Act waiver would be necessary. Senator Kirsten Gillibrand (D-NY) said that as much as she respected Mattis, the dangers of a waiver were too great.

But Congress ultimately granted the waiver and confirmed Mattis, in large part because influential Democratic Sen. Jack Reed of Rhode Island, himself a former Army Captain, urged its issuance. But when doing so, Sen. Reed vowed:

[W]aiving the law should happen no more than once in a generation. Therefore I will not support a waiver for future nominees. Nor will I support any effort to water down or repeal the statute in the future.”

Sen. Angus King (I-Maine), who also voted to confirm Mattis, similarly warned: “I want to be sure it’s a one-time waiver and not for-all-time.” And similar warnings were issued when Trump installed Gen. Kelly as his White House Chief of Staff. “By putting General John Kelly in charge, President Trump is militarizing the White House,” Congresswoman Barbara Lee of California argued.

Can one envision Democratic members of Congress following through on their righteous vow made during the Mattis hearings by not only rejecting one of Biden’s most important Cabinet positions, but also refusing to confirm the first-ever African-American to become Defense Secretary? That is difficult to imagine.

But all of this underscores why the values and methods embraced by Democrats and their allies in the name of opposing Trump were often at least as dangerous, if not more so, as the worst excesses of the Trump presidency itself. Those who warned of the anti-democratic dangers of empowering the CIA and the military to act as a bulwark against Trump in the name of #Resistance, and of restoring the mythology of intelligence agencies as a noble instrument to protect democratic values rather than what they are in reality (one of the greatest menaces to democratic values), were often accused of being pro-Trump partisans.

That was always a deceitful and propagandistic accusation, designed to ostracize #Resistance critics as Trump supporters and, more importantly, to conceal the fact that those sanctimoniously touting the need to preserve “norms” were often the most aggressive violators of those same norms. While it was Trump who chose numerous Generals for key administration position, it was his opponents who applauded and enabled their empowerment and, worse, cheered the anti-democratic subversive acts of the intelligence community to secretly undermine the elected president.

Over the last four years, Democrats and establishment liberals militarized themselves and became far more jingoistic in their rhetoric and far more reverential of the military and intelligence establishments, to the point where they even filled their newsrooms with former Pentagon, FBI and CIA operatives.

For that reason, it is unsurprising to see Biden relying at least as heavily on Generals and intelligence officials as Trump did, including doing exactly that which Democrats vowed in 2017 would not happen again: choosing a recently retired General — one on the Board of Raytheon, no less — to run the Pentagon. But that lack of surprise should not obscure the dangerous and anti-democratic threats posed by these ongoing trends.

Who is the president? Kamala Harris takes ANOTHER call with a foreign leader — Puppet Masters — Sott.net