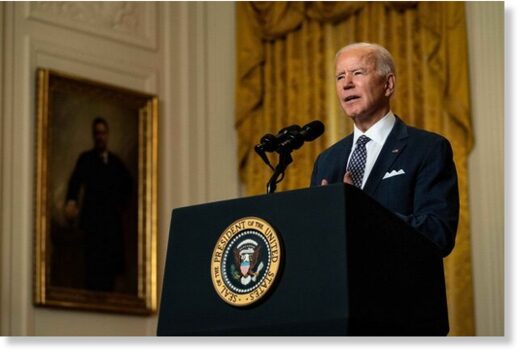 The social cost of carbon could have ripple effects throughout industry.

President Joe Biden on Friday restored an Obama-era calculation on the economic cost of greenhouse gases, a step that will make it easier for his agencies to approve aggressive actions to confront climate change.

But the administration stopped short, for now, of boosting the cost figure to higher levels that economists and climate scientists say are justified by new research.

The interim figure — $51 for every ton of carbon released into the atmosphere — is well above the $8 cost used under former President Donald Trump, who declined to factor the global impacts of climate pollution into his calculation. It’s on par with a price based on analyses undertaken between 2010 and 2016 under former President Barack Obama, whose administration was first to calculate the figure known as the social cost of carbon.

The price point is temporary. A new Interagency Working Group on the Social Cost of Greenhouse Gases is required to issue a final number by January.

“A more complete update that follows the best science takes time. This is why we are quickly restoring the prior estimates as an interim step,” Heather Boushey, a member of the Council of Economic Advisers, wrote in a blog post.

The social cost of carbon is an effort to quantify the economic and societal damage from greenhouse gas emissions in the coming decades. The figure will be baked into the administration’s number-crunching on the costs and benefits of a wide array of regulations.

Friday’s notice, posted on the Office of Management and Budget website, fulfills a promise Biden made on Inauguration Day when he signed an executive order on climate change that called for a recalculation of the social cost of carbon, which the Trump administration had sharply reduced.

The new price per ton is accompanied by discount rates of 2.5 percent, 3 percent and 5 percent, numbers that express the weight of future benefits against immediate ones. A higher discount rate suggests society cares less about long-term consequences than present-day effects. Environmental activists and economists had urged Biden to lower the 3 percent discount rate set by Obama.

Under the figures released Friday, the social cost of carbon will be $51 with the 3 percent discount rate applied. A discount rate of 5 percent would push the price per ton to $14.

The Interagency Working Group, led by the Council of Economic Advisers, Office of Management and Budget and Office of Science and Technology Policy, must issue recommendations on incorporating the cost into government decision-making and budgeting by September and deliver a final number by January.

The working group, in Friday’s notice, said it was “appropriate” for federal agencies to revert to the Obama-era values, even though “new data and evidence strongly suggests that the discount rate regarded as appropriate for intergenerational analysis is lower.”

“The IWG will consider the new science and evidence as it works towards a more comprehensive update,” the group wrote.

Calculating the social cost of carbon is a complex endeavor that represents economists’ attempt to quantify the long-term effects of greenhouse gases on society, for example, rising health costs caused by climate change, property damage from flooding and business losses due to extreme weather.

Economists and environmentalists had pushed the Biden administration to fundamentally change the climate modeling that’s used to calculate social costs in ways that would increase the figure and thereby make federal approval of fossil fuel projects harder to justify.

“This is the interim number — the interagency working group hasn’t even been officially formed yet,” said Gernot Wagner, a climate economist at NYU. “There’s only so much that can happen in a month.”

“Could there be more? Yes,” Wagner said. Citing work done by the Council of Economic Advisers in 2017, he said a 2 percent discount rate is “eminently justifiable.”

“There is broad support in the economics community for a discount rate that is below 3 percent,” he said.

But experts have long disagreed on what the precise figure should be, citing uncertainties over how much damage climate change will inflict. Conservatives and regulated industries say social costs overestimate the risks and thus inflate regulatory benefits of restricting carbon emissions.

During the Trump administration, then-chair of the Federal Energy Regulatory Commission Neil Chatterjee and other Republicans called the social cost of carbon “speculative” and refused to use it.

The social cost of carbon is different from congressional proposals to put a tax or fee on the burning of fossil fuels with the aim of encouraging a shift toward cleaner sources. Rather, it’s an economic estimate meant to gauge the benefits of avoiding those emissions altogether.

Still, the high price point set by Biden could give Democrats ammunition to fight for taxes or other fees to curb climate change.

And while the administration’s social cost of carbon has no immediate effect on corporations, it is likely to influence business activity across industries, including oil, aviation, construction, forestry and manufacturing. States, municipalities and other governing bodies also could incorporate the federal number into their decision-making.

The number could rise as climate science advances, said Paul Kelleher, an associate professor at the University of Wisconsin-Madison who specializes in climate change economics. Advances in translating temperature increases to economic damage have enabled more precise measurements of climate impacts. And the Biden administration has emphasized equity considerations to take into account low-income areas and communities of color, which new modeling makes more possible.

Wagner said a concurrent revision of Office of Management and Budget guidelines might need to be finished before the administration incorporates equity concerns into the social cost of carbon analysis.

Alex Guillén contributed to this report.