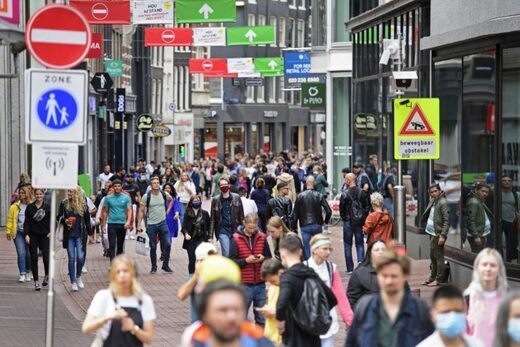 © Olaf Kraak/AFP via Getty Images
Tourists walk at Kalverstraat, a shopping street in Amsterdam on July 25, 2020

The Dutch government is unyielding on masks.

While Europeans almost everywhere else have been required to wear masks in public places to stop the spread of the coronavirus, they’re considered an annoyance in the Netherlands.

“From a medical point of view, there is no evidence of a medical effect of wearing face masks, so we decided not to impose a national obligation,” said Dutch Medical Care Minister Tamara van Ark late Wednesday, after a meeting with health experts and mayors.

The meeting comes after the mayors of Amsterdam and Rotterdam called last week for a compulsory mask rule in some busy areas, following a recent rise in the number of infections in those cities.

Van Ark said that cities are free to “experiment with a toolbox of measures,” including mandatory masks, if deemed necessary.

The Dutch announcement stands in stark contrast to the growing consensus across Europe that masks should be worn in places where social distancing is difficult. Last week, Belgium announced plans to mandate face masks in more public places, and in England they have become compulsory in shops.

Even U.S. President Donald Trump has since done an about-turn and urged Americans to wear face masks.

However, in the Netherlands, masks are mandatory only on public transport, with some experts in the country, such as Anne Wensing, a virologist at the University Medical Center Utrecht, asking whether masks would “actually contribute anything extra.”

The Dutch government insists that it’s strictly following the advice of the experts in the so-called Outbreak Management Team, which doesn’t believe in the general use of masks.

As a case in point: Virologist Jaap van Dissel from the National Institute for Public Health and the Environment (RIVM) said on Wednesday that masks can lead to a false sense of security because people keep less distance. Many people might wear it incorrectly and touch it with dirty hands, thereby increasing the risk of infection, he added.

Moreover, legal experts in the country are skeptical about the legality of compulsory masks. One law professor, Jan Brouwer, told NRC that a widespread mask mandate goes against the constitution. According to Brouwer and other experts, there needs to be a separate law on masks to make this regulation possible.

But critics charge that the evidence is sufficient to implement masks in places such as hairdressers, reports NOS. In a letter to Prime Minister Mark Rutte and Health Minister Hugo de Jonge, a group of experts, including epidemiologist Arnold Bosman, called for quick action.

Belgian virologist Marc Van Ranst, meanwhile, warned the Dutch government on Wednesday that it will have to make masks mandatory in crowded places if the Dutch want to avoid a complete lockdown.

“As in Belgium, the corona curve in the Netherlands has been increasing since July 10,” he told local media. “If the number of infections continues to rise, you will not be able to avoid a face mask obligation.”

As in many other countries around Europe, the number of coronavirus cases has been growing in the Netherlands. Over the past week, almost 1,400 new COVID-19 cases were reported, or 342 more than the week before.

The science around wearing a face mask in the community has evolved during the pandemic. In March, the World Health Organization said that masks don’t need to be worn by healthy people, unless they are caring for someone who is ill.

Then, in early April, the WHO shifted gears, saying that in countries where other preventive measures are hard to adopt, the widespread use of masks can be useful.

Shortly thereafter, the European Centre for Disease Prevention and Control issued new recommendations, signaling increased support for masks. Finally, in June, the WHO issued advice suggesting that masks in public places have a potential benefit for source control.

Some countries, such as the Czech Republic and Slovakia, took action early on in the pandemic, mandating masks in March. In April and May, countries such as Greece, Spain and Germany mandated masks in spaces where social distancing is difficult, such as shops and public transport.

Ghislane Maxwell Finally Arrested by FBI. Is She The Center of The Entire Epstein Case? — Society’s Child — Sott.net